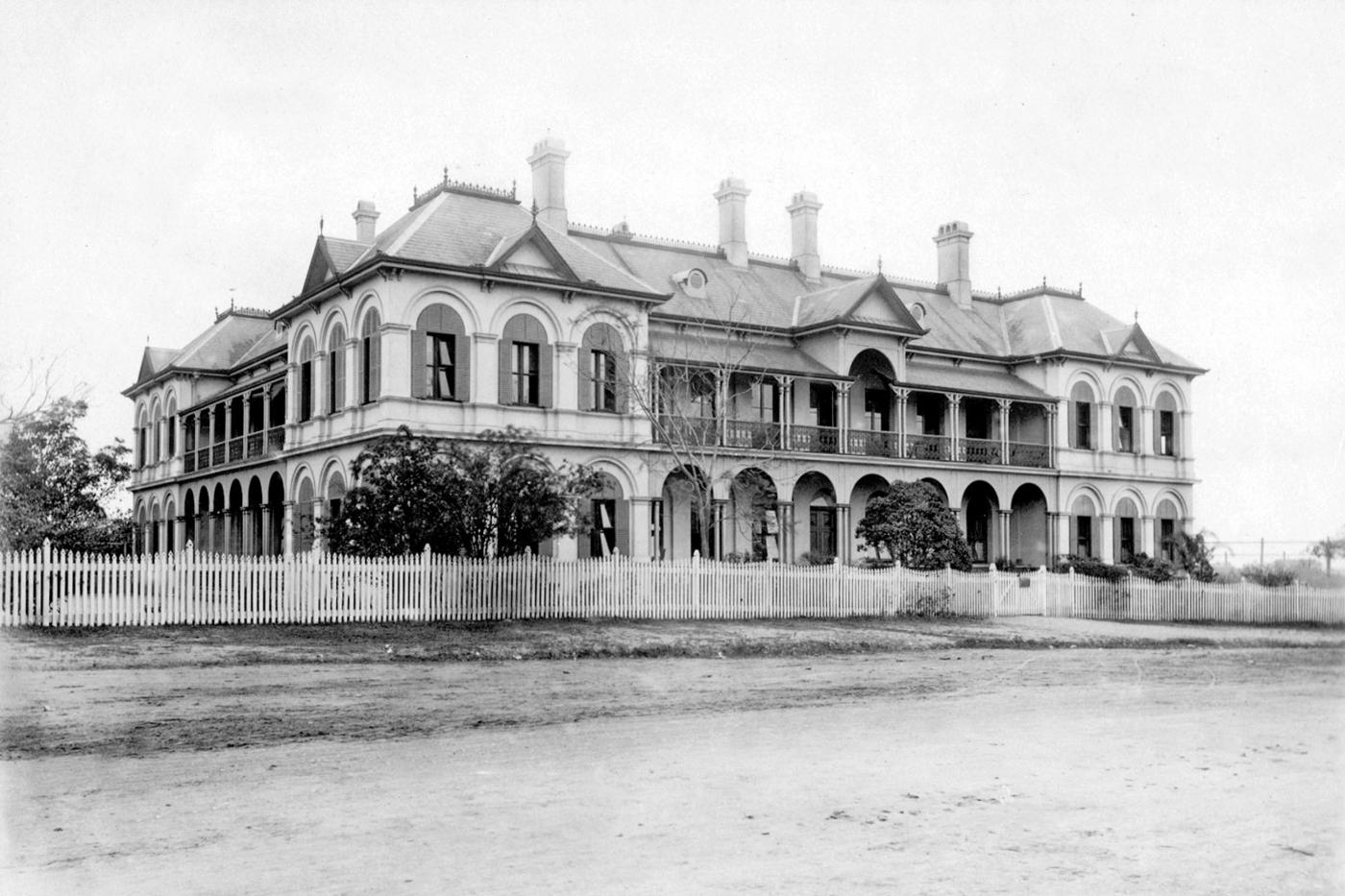 I had a good deal to say recently about the unpractical nature of the system adopted at the Brisbane Boys' Grammar School, and now it seems I am to be the cause of some publicity concerning apparently equally unsatisfactory results achieved at the Brisbane Girls' Grammar School. However, as I am now dealing with young ladies, I must take up the subject tenderly and lift it with care, for I cannot pretend to know so much on the subject of feminine education and its ramifications, as I could in the case of schoolboys.

From evidence placed in my possession, I am inclined to think that there is as much that is hollow and farcical in the system adopted at the Girls' Grammar School as there is in that adopted at the Boys' Grammar School. At any rate, complaints of favoritism have been made, and it is much to be feared that the bright girls are unduly pressed forward in order to make a good show in examination results, while duller girls are neglected and left to flounder without the extra pains, naturally needed by dullness, being bestowed upon them. It must be evident to all who consider the true aims of education with a right judgment, that, if the object of the State to make the best of the intellectual material at its disposal, a dull girl or boy should have infinitely more pains and trouble taken with him or her than should a bright girl or boy.

A tremendous responsibility is thus thrown upon teachers—not so much upon whether the nature of their own erudite acquirements be small or gigantic, as upon their sympathy, tact, judgment and sense of duty to deal for the best in each individual case in order to arrive at the truest aggregate result. Dull children should, therefore, be the object of a greater stress of sympathy and toil on the part of the teacher than should bright children.

But is such a system ever attempted to be adopted in any of our State Schools? In the Brisbane Girls' Grammar School? I fear me not. Prize girls, scholarship girls, girls whose names appear in newspapers in honour lists, who can be pointed out as a brilliant proof of the wonderful success of the school—these be they who receive the lion's share of a teacher's sympathy, her patience of explanation, toil of teaching.

The duller buds may sprout up as weedlings, and climb around in untended anythingness. They will never reach a high standard, is the thought, and so, when they leave the school, they are nothing to the school—no credit to be pointed at as a brilliant meteor of cram, who matriculated with lustre, or climbed some local pinnacle of schoolgirl fame.

Yet they are these dull scholars who form the great majority, and on whom the future of this land much rather depends than on the brilliant few who are hothoused by cram, made to think themselves geniuses for a few months, and then (mostly) fall back into the dull reaction of forgetting all they learned but never understood. It is for these flashes of prize shoddy that the bulk of dull girlhood is neglected.

It must be nice for the dull girl to be let alone, while her more brilliant companion has long, hard, and many studies piled upon her. But that only proves that injustice is done to both parties. The dull girl is left behind in the race for knowledge, when a little more pains, a little more consideration of the bearings of her dullness, and a little more sympathetic explanation, would coax her further— not so fast as her swift competitors, but, still, she'd get further. The bright girl, on the other hand, is loaded with study till her health gives, and she emerges from the conflict a perfect prodigy of learning —a brilliant star in the golden firmament of the school's historical glory—but a physical defeat, nay, often a wreck unable to bear a healthy woman's share in the world's struggle.

And these examinations. Are they not often a farce? Are they not what slang people call a "put up" affair? A "readying-up" for certain known questions and subjects? I fear they are very far from being a true inside test of the real, practical education given.

Also the school reports? I have one before me now, with a letter from the father of the young lady, mourning a plaint about the style of his daughter's education. The report is signed, "Sophia L. Beenland," who is the Lady Principal of the Brisbane Girls' Grammar School. It is apparently an ordinary authentic document, professing to cover, in a tabulated form, the progress of the young lady's education from 27th July last to 9th October, 1885. But the father, who, I should think, would know something about his daughter's school goings-on, writes: —" I have enclosed a report upon my daughter, who is at the Brisbane Girls' Grammar School. These reports, I am inclined to think, are merely a waste of form, and are incorrect. You will see that, in the second week of the quarter, my daughter is stated to have been the 29th girl in a form which only contained 28 girls! Also, my daughter alleges that she has never been in 'class-singing ' — she never sings. Yet, against 'class-singing,' she is classed as 'good’!

The report does certainly bear these inherent errors, and if all the reports were to be formally scrambled together without reference to facts, they would certainly be of no test value at all. The jumps the girl appears to have made from week to week in her form, seem very erratic, when the classifications against the various subjects are considered, but, still, it would be illogical to attempt to draw deductions from data I do not understand, so I will say nothing about that.

The former points, however, seem to prove to me conclusively that there is a looseness of system in the Brisbane Girls' Grammar School which needs the patient and thoughtful examination of the Trustees and governing authorities, as much as does the remarkably mixed condition of the Boys' School.

The father of the young lady I mention has another grievance—as to the treatment of his daughter; but, as that may arise solely from the anxious tenderness of parental bias, I will leave it alone.

I do not wish to be understood as referring personally to the lady of high attainments who governs the school, nor to any individual teacher, but I do think it is high time those who have true educational results at heart, and who believe in Grammar Schools and have helped to establish them in the colony, should set about peering into the loose joints of the system now in vogue, and endeavour to frame working methods to practically cement together those loose joints.

Brisbane Girls Grammar School was founded in March 1875, six years before women were admitted to universities in Sydney and Melbourne. The school opened as a branch of Brisbane Grammar School with fifty female students under the direction of a lady principal, Janet O'Connor, in premises on George Street, Brisbane. Within six months the school outgrew these premises and subsequently moved to a site on Wickham Terrace.

By July 1882, the school was well established and a decision was made to separate from Brisbane Grammar School, so as to operate independently under the Grammar Schools Act. Plans were also made to move the school to its present location on Gregory Terrace, Spring Hill. In 1884, the Main Building, designed by architect Richard Gailey, was opened to one hundred students.

The school's motto is Nil Sine Labore, Latin for "Nothing Without Labour". It was adopted from the Brisbane Grammar School, which in turn borrowed it from Horace's Second Book of Satires. The school badge is an open book on a shield with the school motto on a ribbon underneath. The open book was also borrowed from Oxford University, where over half of the original staff of Brisbane Grammar School were originally secured. The School colour is Royal Blue, adopted from the colours of Brisbane Grammar School, which were originally derived as a compromise between the Oxford colour of Light Blue and the Cambridge colour of Dark Blue. 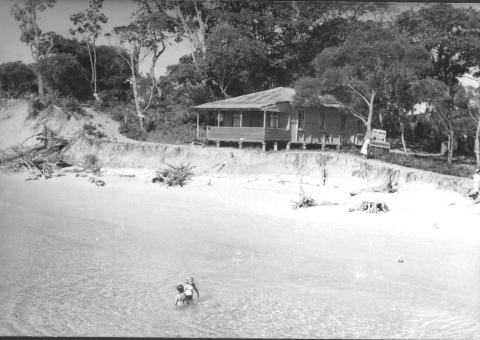 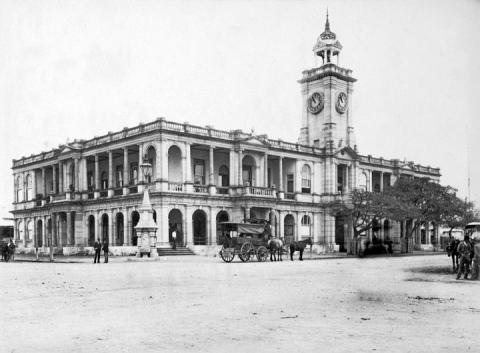