A fire broke out at the southern end of the No. 1 fitting shop at the North Ipswich Railway Workshops early yesterday morning. When the 1:40 train arrived at the Ipswich railway station, it was noticed by Driver Wallace and Fireman Archibald, who were in charge of the engine, that a light was burning in one of the shops. Thinking, however, that the workmen were working overtime, they went on with the necessary shunting operations for some time. These completed, the engine was driven across the bridge into the yards, when it was seen that the light had developed into a large blaze. They at once blew the railway whistle, and the firebell was also rung. A contingent of the brigade soon brought the reel on the scene; and a goodly number of spectators also speedily arrived. There being plenty of hose, and a good pressure of water, the flames were, after some hard work on the part of the firemen, subdued. The fire at one time burned very fiercely, and, as the structure is built mainly of galvanised iron, a great heat was thrown out. The woodwork of the southern end of the building, to which the flames were confined; was ruined; while a considerable number of accessories of engines were destroyed, together with other articles. Several of the workmen lost all their tools, their losses varying between £12 and £20 each. The amount of damage sustained by the department has not yet been estimated, but it is apparently very considerable. There is not the slightest clue as to how the fire originated. The building was yesterday morning inspected by Messrs. H. C. Horniblow (Locomotive Engineer), W. Pagan (principal assistant to the Chief Engineer), and J. A. Holdsworth (District Traffic Manager). An inquiry into the circumstances surrounding the occurrence was held during the day, but no decision has as yet been announced. The building was not insured.

Unlike other colonies, the first railway in Queensland started from a provincial town, Ipswich, instead of from the capital city, Brisbane. The rationale was that transport between Brisbane and Ipswich was already adequately serviced by river, and the most urgent need was to improve transport between Ipswich and the productive Darling Downs region.

The construction contract was awarded to well-known British contractor Peto, Brassey and Betts. Work started in early 1864 and the first section of line was opened in 1865, gradually extending to the Darling Downs and eventually further west. The link between Ipswich and Brisbane was completed in 1875. The first workshops were also built in Ipswich on the southern end of the present site. Construction materials ordered from Britain arrived by ship in Brisbane, then were brought to Ipswich by paddle steamer.

The early workshop buildings included two pre-fabricated "erecting shops" which had been sent out from England; they had cast iron frames with wrought iron roof trusses and were clad with corrugated zinc. These buildings no longer exist.

A number of other buildings were then constructed by local contractors. In 1878-79, the Railway Store Building was erected by Ipswich contractors McGregor and Brown; this is the only building on the southern part of the site which is still standing and it is now used as the Railway Historical Centre (60004- R1). The last of the other early buildings was demolished in 1910. Some components such as roof trusses appear to have been re-used, for example in the Westinghouse Brake and Spray Paint Shed (building R48).

The North Ipswich Railway Workshops were initially required to carry out assembly and maintenance only, as the first locomotives used in Queensland were imported from Britain. In 1865, the North Ipswich Railway Workshops built its first item of rolling stock, an engine truck. Ten wagons were built in 1866. The Workshops advanced rapidly and in 1877, built its first locomotive, an A10 class constructed mainly from existing spare parts. The workshops would eventually build 218 steam locomotives, the last in 1952.

As activity at the Workshops increased, the site became cramped, providing no room for further expansion. Additional land was obtained adjacent and to the north of the original site.

Six substantial buildings [the Carriage (R.2), Wagon (R.4), Painting, Fitting and Machine Shops (R.3) and the Smithy (R.5)] plus some smaller timber sheds were completed in the 1880s but the construction program then stopped. Although only a few of the planned buildings were completed, they were arranged in a formal row and this set the basic future layout of the workshops. Financial restrictions and uneasiness about the site after the severe flooding of 1893 seem to have delayed further construction

Work continued in the workshop buildings at both ends of the sites. This was inconvenient and the buildings were still not adequate for the volume of work. After two accidents in the late 1890s, a Court of Inquiry was held and recommended that the workshops should be "enlarged, extended and equipped with most modern tools and appliances."

William Nisbet, formerly General Manager of the Westinghouse Brake Company of Australia, was appointed to handle the expansion.

Up to this time, the buildings constructed had been relatively small; they were rather narrow and were to a great extent general purpose buildings. The existing workshops staff recognised the problems that existed and were planning for modern equipment (eg they had already considered use of a Traverser) but they were still thinking on a small scale. Nisbet, with his wider experience, seems to have had the vision to plan for future growth with buildings that were larger, capable of being equipped with larger equipment such as huge overhead cranes and capable of a more efficient work-flow.

The major decision in modernisation was to use electricity, so a power house (R.10) was a key new building. To improve the layout of buildings, a traverser was installed to move equipment between sheds.

Other major construction during the 1900 expansion period include the huge Boiler Shop, (R.14), Carriage and Wagon Shop (R.12) and Machine and Erecting Shop (R.13) on the southern side of the traverser, and a new Smithy (R.7), Store (R.6), Foundry (R.8), Forge and Pattern Shop (R.9) on the northern side. Buildings such as the Blacksmiths Shop (R.7) and the Foundry (R.8) were about three times bigger than the earlier buildings. Some of the construction work was done by contract but some was also done by day labour with up to 360 men employed, the average being 100.

After the major building program of the 1900s, some building work continued, mostly timber buildings for ancillary purposes rather than major new shops. The most prominent visually was the Time-keepers Office (R.17) at the front gates in North Street. Drafting and administrative offices (R.24) were built and a dining room (R.16)was set up for employees. To make the workshops more self-sufficient, the output of the sawmill was expanded so sawn timber did not have to be purchased.

During World War I, about 300 of the 1600 employees were engaged in production of munitions, particularly shell casings made using BHP steel.

Two other events in this period gave prominence to the workshops. In April 1918, an experimental smelting of iron ore from Biggenden was carried out using the moulders furnaces.

In December 1919, the Vickers Vimy aircraft of Ross and Keith Smith broke down near Charleville after completing the first flight from England to Australia by an Australian crew. North Ipswich Railway Workshops repaired the engine. New connecting rods were forged and machined and the crankcase, damaged when the rods broke, was repaired. A new propeller was also made from Queensland maple.

When World War II began in 1939, the workshops were again involved in wartime production. A 30-ton casting, the largest ever made at the workshops, was produced in 1942.

In 1941, the Commonwealth Government set up a munitions factory at Rocklea. Tools for accurate mass-production were required for the factory and the Commonwealth entered into a joint arrangement with the State Government to build a new Tool and Gauge Shop (R.19 & R.20) at North Ipswich Railway Workshops. The Acting Prime Minister stated that the Railway Workshops was chosen rather than a site near the Rocklea factory because the long-term benefits to Queensland would be greater. He said that Queensland had little industry involving mass-production because of the high initial cost of "tooling-up" and he hoped that the new shop would act as a catalyst for post-war industry. In 1944, an x-ray plant was commissioned for the Boiler Shop to detect flaws in casting and welding.

During World War II, very little new construction could be carried out at North Ipswich Railway Workshops and in the immediate post-war period, Queensland was faced with ageing stock and little immediate capacity for new production. An inquiry recommended that new workshops should be built in the Rockhampton and Townsville areas, and that a new workshop should be built in south-eastern Queensland for locomotive construction and repair, leaving North Ipswich Workshops to cater for carriages and wagons. It was also decided that future rolling stock would be steel where ever possible, a decision which reduced the need for large sawmills at the North Ipswich Railway Workshops.

At this time, land was available in the Ipswich suburb of Redbank where a huge army camp had recently been de-commissioned. The Redbank site eventually opened in 1958. Although it was originally intended for steam locomotive production and repair, its construction coincided with the change to diesel and it became the centre for diesel locomotives. In 1965, the Foundry and Pattern Shops were transferred from Ipswich to Redbank. In 1995, a complete relocation of remaining activity from North Ipswich to Redbank was commenced.

New buildings constructed at the North Ipswich Railway Workshops since 1950 include an Apprentice Training Centre built in 1955; a new sawmill commissioned in 1968; a Plan Printing building completed in 1979; a new training centre built in 1990. 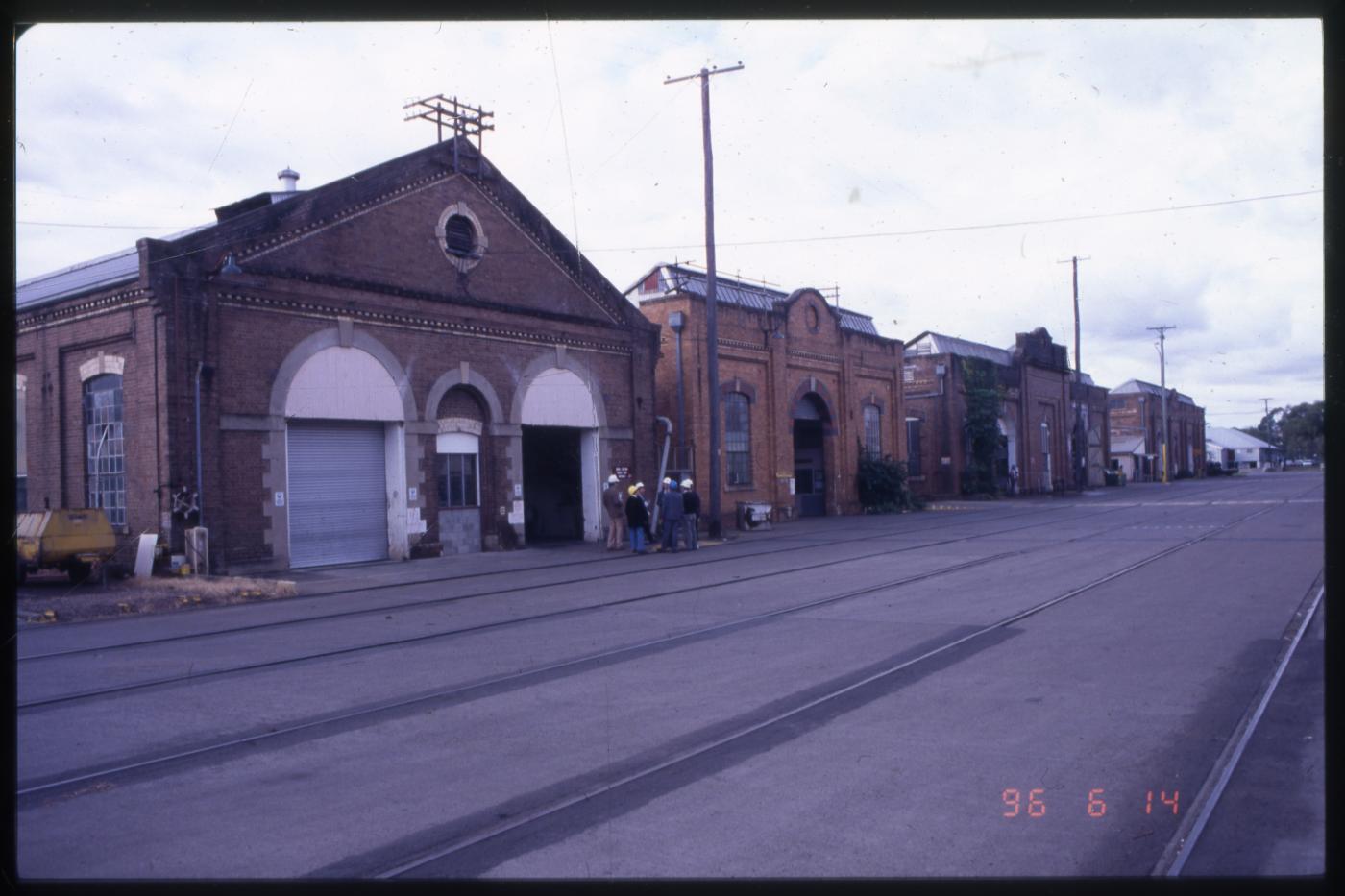 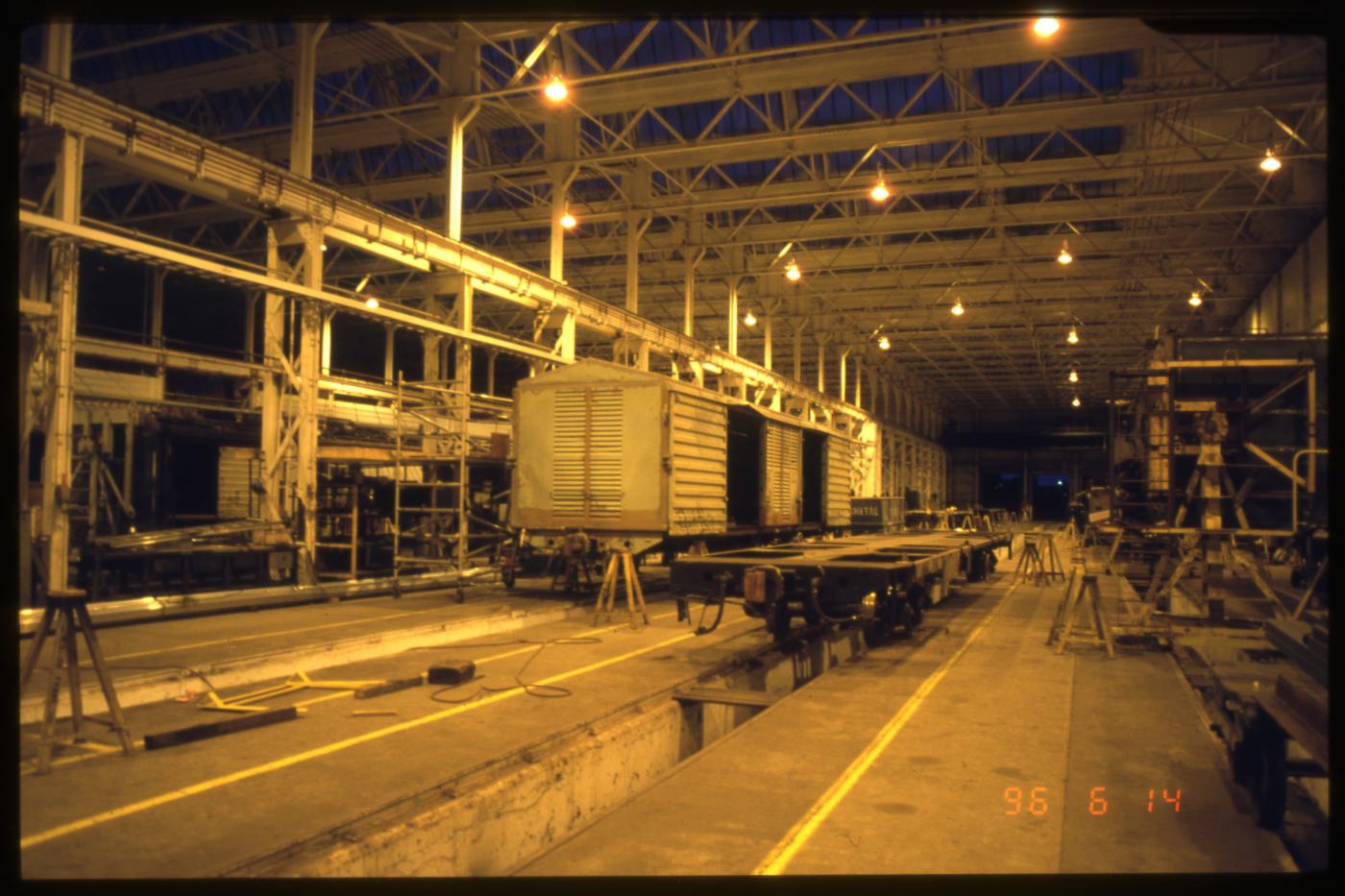 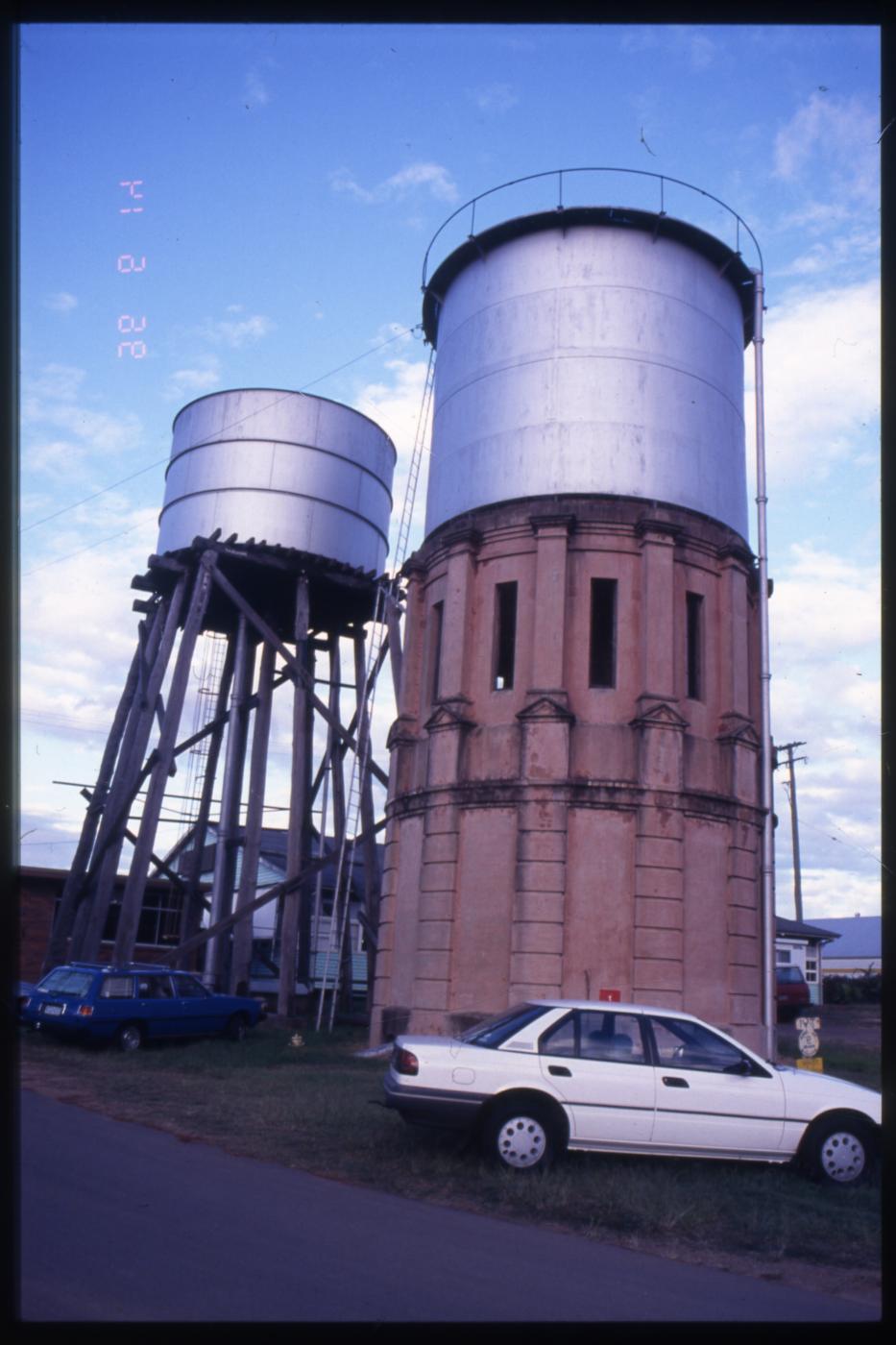 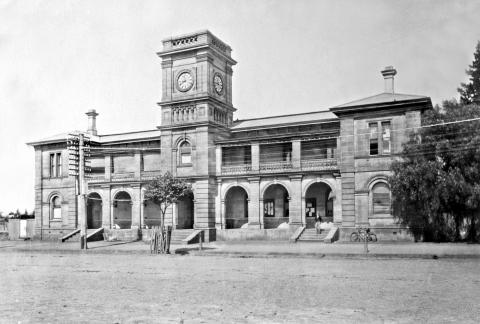