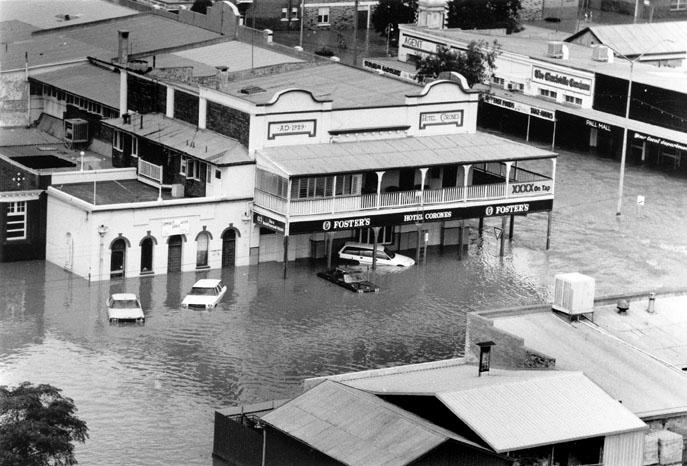 One of the most brilliant spectacles presented in Charleville for many years was the Cabaret which marked the official opening of the roof garden at the Hotel Corones on Tuesday night last. The spaciousness and beauty of this modern hotel provided a glorious seating for such an event. The roof garden, hall and courtyard were a veritable fairyland of tasteful decoration and illumination, and, with tables arranged in excellent Cabaret style both in the courtyard and on the roof garden, the comfort provided for guests was all that could be desired.

The official opening was performed by His Worship the Mayor (Ald. O. J. Allen), whose speech paid fine tribute to the progressive spirit that has characterised the forward move of Charleville during recent years, said that his great wish was to see a further promotion of co-operation and unity in matters that would make for a bigger and better Charleville. He congratulated Mr. Corones on his enterprise and hoped that his investment would prove a profitable one.

Dancing was carried on until early morning and some excellent Cabaret interludes were presented.

Mr. A. George sang "Macushla", with fine effect and Mr. M. Considine rendered "Little Town in the Ould County Down" in his usual good style. Mr. R. Gaskin demonstrated the Blackbottom and as an encore number showed some versatility in a patter dance. Miss Ivy Kempwich performed a Cabaret solo dance which was warmly applauded and two excellent Ballets were presented. The first "'Strolling through the Tulips" showed that Charleville has some excellent youthful talent and great credit must be given to the Ballet Mistress (Miss M. Seymour) for the amount of hard work which she undoubtedly spent to bring about such a creditable standard of performance. Mr. Rod. McLeod's rendition of 'Vienna," in which he was assisted by the Ballet in chorus, was one of the tit-bits of the evening. His deportment and style are undoubted and in light numbers such as this he shows fine interpretation.

The Viennese Tango, danced by Miss A. and Mr., H. Seymour, concluded a diversity of specialty turns which fully earned the generous applause it received.  Their work was polished and finished and carried with it a real professional touch. Altogether it was an entertainment of good calibre, and "the hard-working committee (Messrs. Eedy, Corones and Midgley, and Mrs. Midgley and Miss Bowman) which was responsible for it is to be complimented on the fact that the budget will just be balanced when the final figures have been compiled. To Mr. Corones and his staff tor the excellent supper served in the dining hall, and to the many other workers and supporters who contributed to its success every credit is due.

The first half of the 1920s was a time of economic prosperity in Queensland unrivalled for three decades. The boom was sustained longer in the building sector than in others; and in Brisbane the transformation of the city's central business district was a tangible legacy of the boom. In Charleville the main streets gave an air of solid prosperity to this centre of one of the richest areas of western Queensland ... it has fine hotels, stores, offices of the leading pastoral firms, and a full complement of general business concerns. There is a most attractive School of Arts, Town Hall, [and] three churches ... There is a most excellent club, the "Warrego" ... The fledgling QANTAS commenced their first commercial services from the town in 1922 ("replacing" the last Cobb & Co coach which ran in 1920); in 1924 the town turned on electric lights; and in 1926 a new Town Hall was completed. However a severe drought in 1926 described by the Charleville Chamber of Commerce as the worst season known by black or white man with losses of sheep to the enormous extent of eleven millions was to bring the state's pastoral and agricultural sectors to collapse and many rural towns entered a slow decline into the world-wide depression of the 1930s.

On the cusp of the boom/bust, Harry Corones was to commence building his grand vision of hospitality for the west to rival the capital's best hotels. Born on the Greek island of Kythera, Harry "Poppa" Corones arrived in Australia in the early 1900s coming to Charleville by 1909 when he was recorded in the Post Office Directories as a "fruiterer". Reputedly on the encouragement of a brewing company representative, Corones became in 1912 the licensee of the Hotel Charleville, which he operated until 1924.

In 1926 Corones became the registered owner of the Hotel Norman, a single storeyed hotel established c1895 located a block south of the Hotel Charleville on the corner of Wills and Galatea Street. In an advertisement in Pugh's Almanac for 1905, proprietor DC McDonald claimed the hotel as the leading hotel of the southern western line ... the home of the pastoralist, agriculturalist and tourist with lofty cool bedrooms, hot and cold baths, and good paddocking - claims which would be later repeated and amplified by Corones regarding his own hotel.

Construction of Corone's Hotel Norman (as it was then called) commenced in 1924. Rising phoenix-like on the site of the old Norman Hotel, the ambitious scheme was built in four stages from the south to the north to enable continuation of trade; the construction dates displayed at either end of the building testifying to the five year enterprise. Significantly, given the number of (timber) buildings in the town destroyed by fire including Corone's former hotel the Charleville (actually destroyed by fire twice), Harry Corone's new hotel was a masonry building. The first two stages were of reinforced concrete, the third including the ballroom and final stages of brick. Costing some £50,000 the hotel was built by day labour with preference given to men of the district. By the end of 1926 the new hotel was two thirds complete; only the bar area of the Norman Hotel remained. The mythology of Corones was also well advanced. According to the Australian Pastoralist, Grazing Farmers' and Selectors Gazette the hotel was the topic of conversation from Roma to Eulo, and out to the far west and north ... In every way the new Hotel Corones will be an example of hotel architecture and comfort scarce equalled in the Southern Hemisphere, and will undoubtedly be a great centre for all western men. 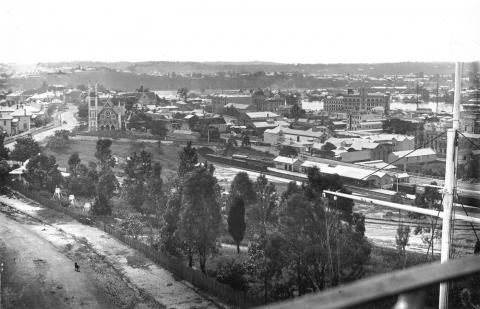