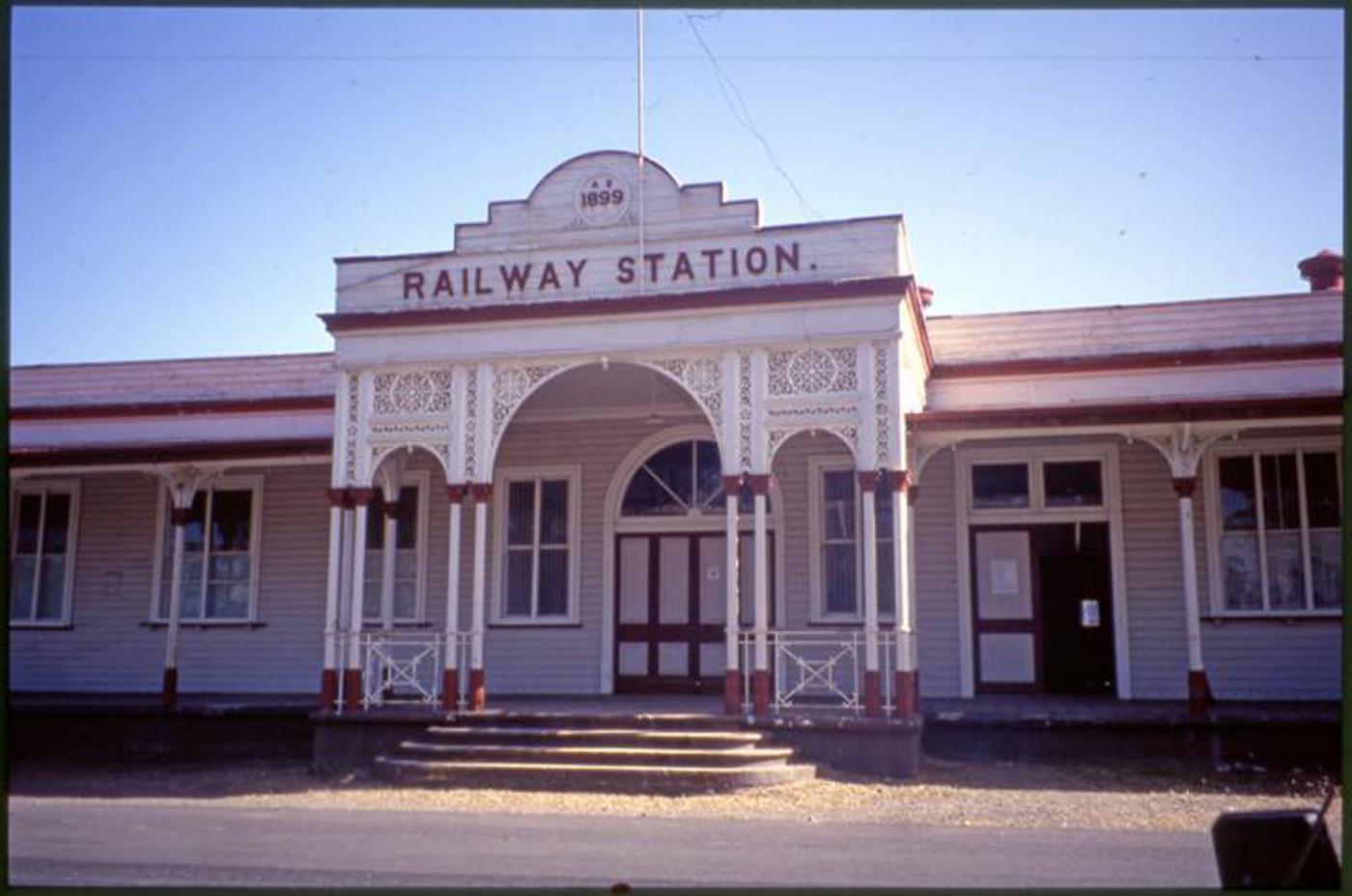 The unsatisfactory state of affairs at the Archer Park railway station was the subject matter of a complaint by Mr. E. S. Lucas at the monthly meeting of the Rockhampton Chamber of Commerce on

Thursday week.  Mr. Lucas said that he had been informed that the Archer Park railway station was closed every day from noon until two o'clock in the afternoon.  The cloak room was shut and parcels could not be put in or taken out. It was most inconvenient for people who sent their parcels there prior to going away by train.  It was decided to request the Railway Department to have arrangements made to keep the cloak room open the usual hours instead of closing it for two hours in the middle of the day.

Archer Park Railway Station, the former Rockhampton Central Railway Station, is situated on Denison Street and forms an important link with the social, cultural and transport history of Rockhampton and central Queensland. It was the major railway station in Rockhampton from the turn of the century until the mid 1920's, and is an important element in the development of the railway network in Queensland, and the growth of the North Coast Railway in the early part of the twentieth century.

The Archer brothers had made a private expedition to the Rockhampton district in 1853, and were the first Europeans to record and chart the Fitzroy River. The Archers were also the first European pastoralists to arrive in the area. Their establishment of Gracemere station (QHR 600508) lead to further pastoral expansion into the area.

In 1863 the Parliament of Queensland passed the controversial Railway Bill, which committed Queensland to the use of a narrow gauge for the development of its main line in Queensland. Other colonies in Australia at this time had adopted broader gauges for use on their rail networks. The reasoning behind this decision was that a narrow gauge would have lower construction costs.

The first section of the Queensland railway network was opened between Ipswich and Bigges Camp on 31 July 1865, and later extended to link the towns of Warwick, Dalby and Toowoomba with Ipswich. At the time that the Railway Act had been passed, the 5000 citizens of Rockhampton objected to having no provision made for the construction of a railway to their hinterland, where copper was being exploited in the Peak Downs area. A railway was thought necessary to ensure development of the interior.

The first length of line was opened to Westwood some thirty miles (fifty kilometres) from Rockhampton in 1867. The line was extended beyond the coastal ranges in 1872, reaching Emerald in 1879. The Central Railway was progressively extended further west reaching Longreach in 1892, and remained an isolated railway system, with no connection to the southern division of Queensland railways until 1903.

In 1882 after Brisbane had acquired a railway to the seaside at Sandgate, Rockhampton clamoured for a similar connection to its resort at Emu Park. Construction of the Emu Park line was approved in 1885 and the line opened in 1888. The 1880's was a period of economic and civic expansion in Rockhampton as a result of the discovery and exploitation of the gold and ore body at Mount Morgan in the Dee Range forty kilometres from Rockhampton.

The line, similar to Bundaberg, featured a railway system divided by a major river. This consisted of a line running from a terminus in Stanley Street to Gracemere and westwards, and the line at North Rockhampton to Emu Park with no physical connection. Two years after the opening of the Emu Park line, the Railway Department began investigating the possibility of linking Rockhampton's two separate railways. The bridging of the Fitzroy River and the cost of land resumptions to join the two terminus stations were to be major difficulties in connecting the two lines.

Trial surveys in 1890 investigated two routes, but the financial crisis of 1893 forestalled further work. The impetus for bridging the Fitzroy River came from the decision of the Queensland Government to construct a deepwater port at Broadmount at the mouth of the Fitzroy River in 1894, and to link the Central Railway with North Rockhampton via a bridge across the Fitzroy and a line running via Denison Street. The original plan called for a single line down Denison Street and for a single track bridge, however the Rockhampton City Council protested against this decision. Following a visit to Rockhampton by HC Stanley, the management of the Lakes Creek Meatworks at North Rockhampton convinced the Railway Department to construct a double line to North Rockhampton, as it was felt that developments in livestock and goods traffic would justify the initial outlay. In 1895 construction was approved for what was to be known as the Rockhampton Junction Railway. The new bridge and connecting line were the first examples of double lines outside of the Brisbane-Ipswich metropolitan area. The Rockhampton City Council gave half of Leichhardt Park (Archer Park) and Denison Street which allowed for the construction of a central railway station. The Council approved this work in October 1896.

The future station at Archer Park was first sketched out in 1897 in Brisbane. The concept developed was for a station separate from the main line down Denison Street, but connected via a loop line crossing the southbound line by crossovers and slip points. A single platform was to be provided 300 feet long and 20 foot wide, with an arched carriage shade running full length of the platform. The track to the platform and the three track loop line left only a small strip of roadway available along Denison Street. The plan was subsequently altered to allow for a larger space for vehicular traffic on Denison Street.

An amended plan for the station building was prepared in late 1897. This incorporated a station building 140 feet long, with a 10 foot wide verandah running its full length along the street elevation. A cloak room was also added to the plan.

Final plans were produced in 1898 by architect Henrik Hansen (1843-?). Hansen had joined the Queensland Railways in 1877, and was responsible for the design of many utilitarian buildings and structures. He was also responsible for the design of the railway stations at Mount Morgan (1898) (QHR 600752), Cunnamulla (1898) and Winton (1898), the refreshment rooms at Toowoomba (1900) (QHR 600872), and Emerald Railway Station (1900) (QHR 600490). Hansen was also involved in the design of the new Railway Workshops at North Ipswich (c.1901-13) (QHR 601526). Hansen was retrenched in 1904. Similar features of the stations designed by Hansen, particularly at Mount Morgan, Cunnamulla and Winton, included an all-over arch roof or carriage shade, designed to provide cover to passengers and goods being loaded at the platform.

The tender for construction of the Rockhampton Junction Railway was awarded to GC Willcocks in 1897. The contract involved the construction of the branch to Broadmount, the Denison Street line, and the Alexandra Railway Bridge (QHR 600799). Construction was delayed until 1898 on the bridge due to flooding on the Fitzroy River. 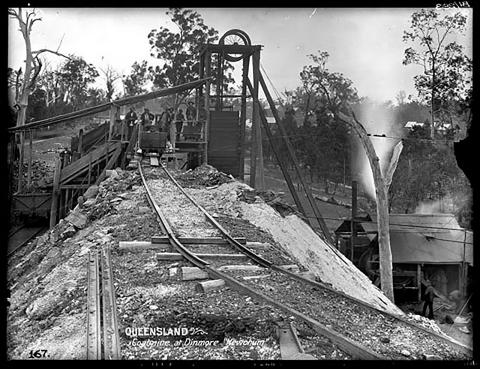 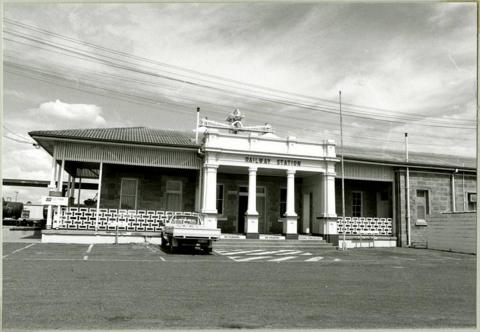 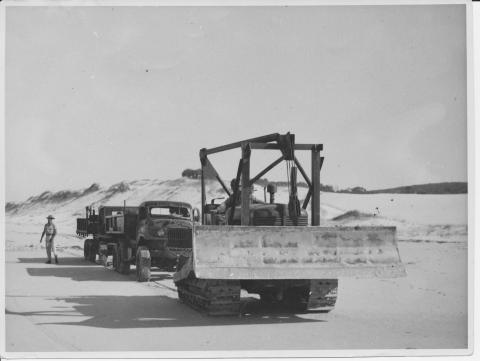