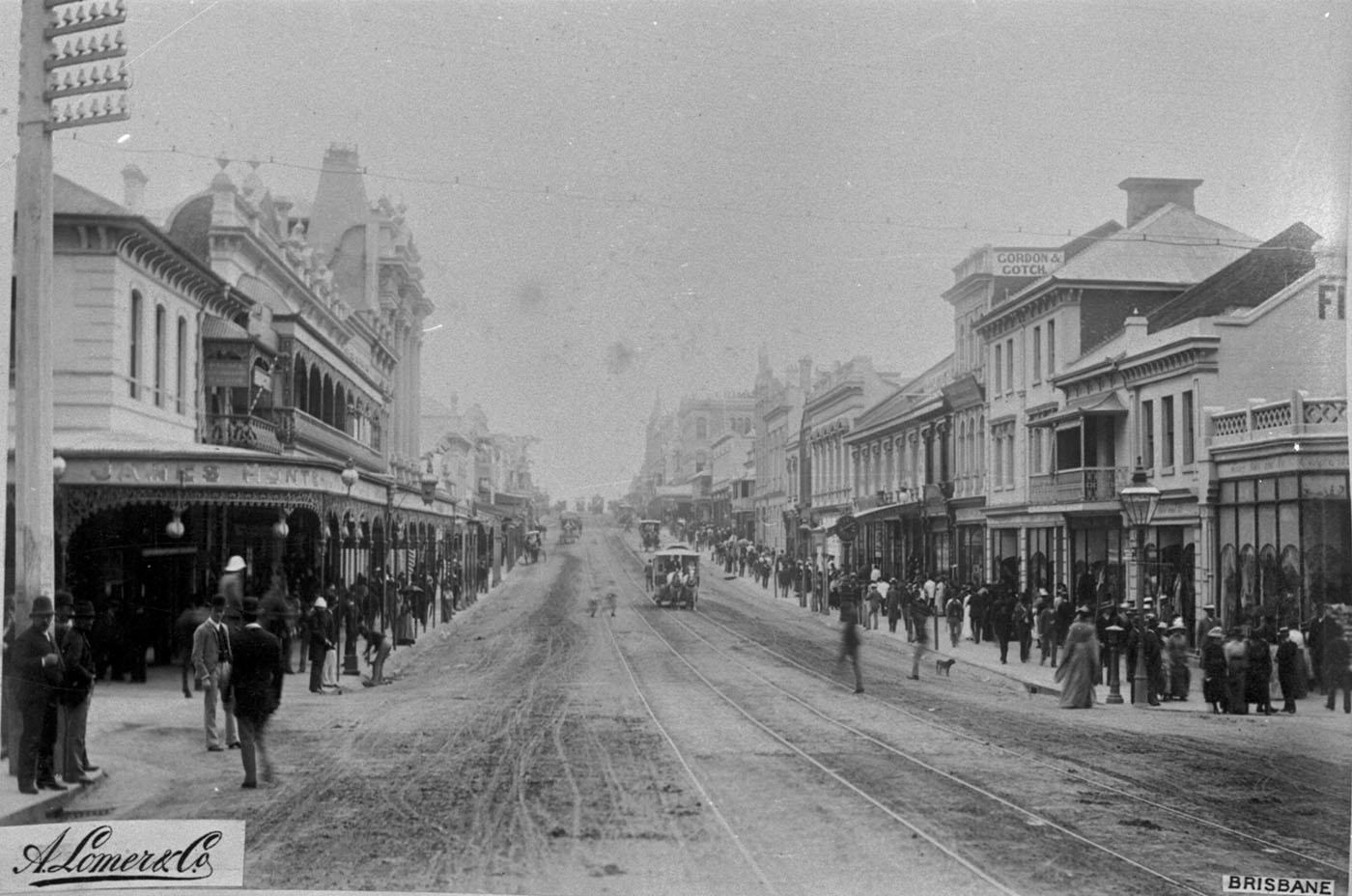 Shortly before 10 o'clock last night the fire bell rang out and would doubtless have startled the Sunday repose of citizens, had it not been that false alarms have been somewhat frequent of late. All doubts as to the reality of the conflagration of which it gave notice on this occasion were speedily set at rest by a glare which strongly illuminated the upper part of Queen-street.

The fire broke out apparently in the upper rooms of the premises occupied by Mr. J. Deazeley, the photographer, situated between the Railway Department's Offices and the baby linen warehouse of the Misses Blake, to which the flames quickly spread, threatening Mr. Page's drug establishment. The hose of the fire brigade was on the spot within between five and ten minutes of the bell sounding, and with the assistance of a body of police one range of hose was connected with a plug in George-street, and brought into play at the rear of the premises.

Under the direction of Inspector Lewis, the police, assisted by a few civilians, cleared out the sheds communicating with the burning building, which were heaped with crates and cases, of a readily ignitable nature, belonging to Mr. Page. The furniture was also shifted from Dr. O'Doherty's consulting room; and at the other extremity of the scene, the office fittings were removed from the Railway Department's rooms without suffering much damage in the transit. At Deazley's a number of liberty-men belonging to the Barracouta were quickly to the fore, but being unofficered and in search of excitement, they merely, as far as we can learn, assisted some civilians in tearing a hose right away from the water plug, in the endeavor to reach with the nozzle a point beyond the length of hose available. Within some ten minutes of the fire bell ringing however, two cutters left the Barracouta, conveying a number of officers and crew, with fire buckets and hatchets, belonging to the ship.

This detachment were quickly on the scene, and the local fire brigade about the same time had gathered pretty strong. The usual reckless gutting of the premises was carried on, and the contents of both Deazeley's and the Misses Blake's premises might almost as advantageously have been allowed to burn as to be tumbled about and smashed up as they actually were. The accident to one of the ranges of hose permitted the fire to gain ground quite unchecked in the interior, where the woodwork partitions were blazing fiercely even while the flames on the roof were being subdued. It took some time to get anything like method introduced into the proceedings and then at last the services of the sailors were availed of, and under the command of their officers they were of the utmost use in keeping the hose and shifting it from place to place as required.

The men of the fire brigade worked zealously and manfully, as they always do. The police had from the first endeavored to prevent any part of the premises being broken open, but Mr. Deazeley insisted on entering to try and save his books or cashbox, and at last got in through the door of the Misses Blake's shop. By 11 o'clock the fire was evidently under command, and by half-past the fire was to all intents and purposes extinguished. At this time the bugle of the Barracouta sounded in the street, and the blue-jackets mustered and returned to their vessel, being vehemently cheered by the crowd as they moved off, in recognition of their zeal and activity.

Do you spot the sign for Gordon and Gotch? John Gotch migrated to Australia, intent on striking it rich with the gold rush, in December 1853. Sadly his quest for gold failed to deliver and Gotch began selling newspapers for Alexander Gordon, that became a business partnership.

When Gordon returned back to Scotland in 1859, Gotch took over the business, which was, by then, the main importer of newspapers and magazines from. In 1875 Gordon & Gotch opened their Brisbane office, in time for Albert Lomer's camera to capture them in this photo!