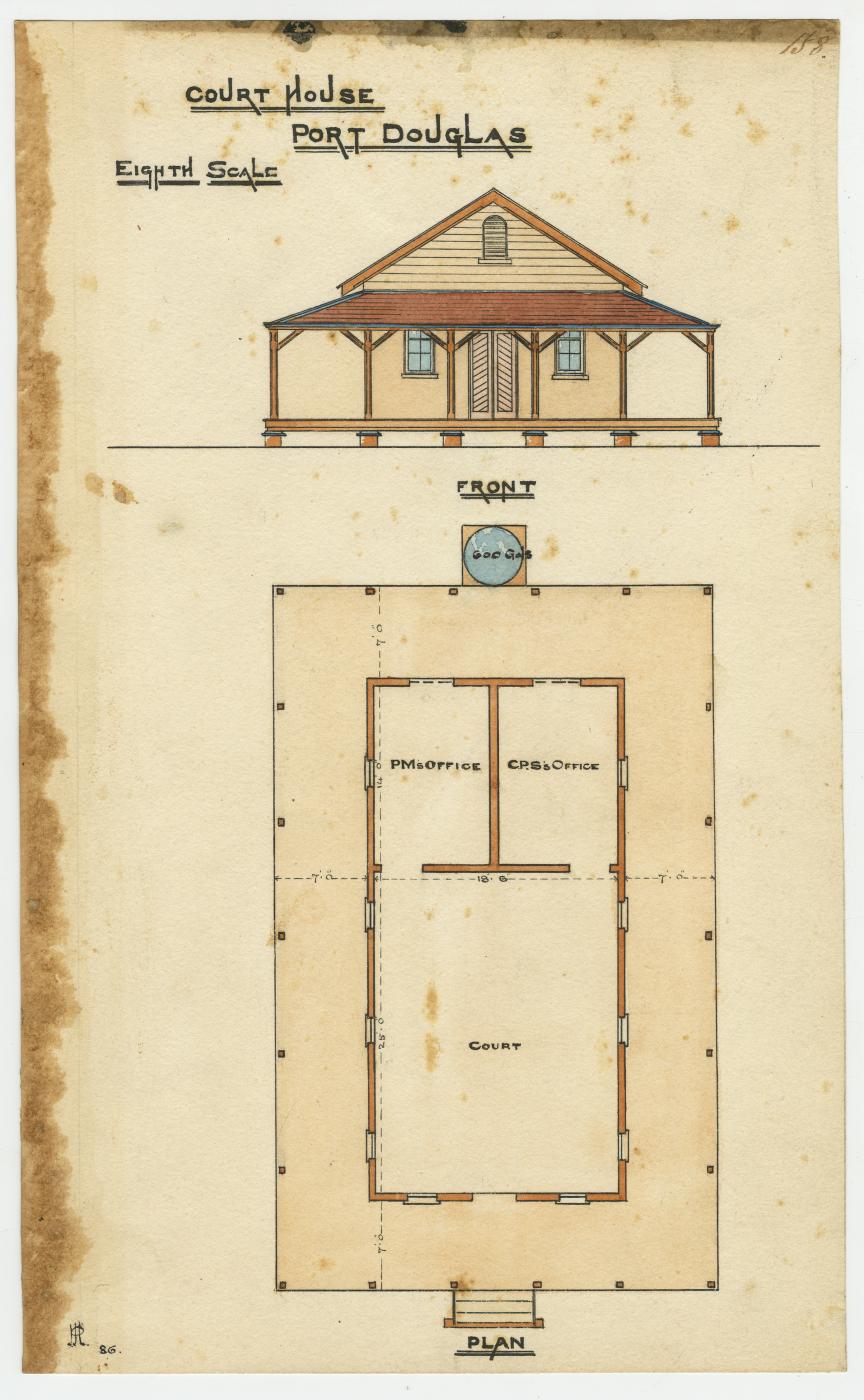 By Our Travelling Reporter

Port Douglas reminds one only too forcibly of a deserted village. Unfortunately I had only two hours of daylight in which to take in the surroundings of the place. The mail steamer from Brisbane arrives about 4 in the afternoon, and the coach for Herberton leaves next morning at 5 o'clock. The town is placed on a small picturesque headland with the harbour on the north side, and a splendid stretch of sandy beach, about seven miles in extent, on the south side, connected by the main thoroughfare, Macrossan-street. Port Douglas at one time was a very flourishing port, but since the commencement of the Cairns-Herberton Railway its business has been gradually dwindling away, and when the railway has reached as far as Granite Creek I am afraid it will almost disappear.

[...] The town population of Port Douglas is about 300, and of the district 800. Unfortunately decay and neglect are everywhere visible in the township. Empty shops can be counted in dozens, of empty houses there are not a few (the same thing, however, may be truly said of Brisbane), yet it is not these which so forcibly impress a stranger, it is the air of positive desertion which seems to hang over the place. Natural beauties Port Douglas possesses in abundance; it is a romantic, picturesque spot, but there is nothing whatever attractive in the township - a newly painted fence would be quite foreign element.

[...] The people, I may remark, are most kind and hospitable, and readily extend to a stranger all the courtesy and consideration at their command. En passant I might suggest that the Government buildings should receive a little attention. The post office, for instance, presents a very poverty-stricken, weather beaten appearance, and it is somewhat ridiculous to have to summon the telegraph clerk by striking an old cow bell. Such a mode of communication with a Government servant is not respectable.

Port Douglas was established shortly after the discovery of gold on the Hodgkinson River in 1876. At this time the nearest port was Cairns, which was only accessible over difficult and mountainous terrain. In 1877, well-known bushman Christy Palmerston discovered a new route which gave easier access from the goldfields to the coast. By the end of the year, the site had been surveyed, declared a port of entry and clearance and officially named Port Douglas.

Trade from the goldfields quickly transferred from Cairns to the new township, followed by businesses. The government expressed confidence in Port Douglas by allocating £2000 for a road to the Hodgkinson River and also by constructing many public buildings in the town in the early stages of its development.

The Court House was constructed in 1879. The first Police Magistrate arrived in 1878, and the only place to conduct court sessions was in one of the newly constructed police cells. This was considered unsuitable, and the new Police Magistrate requested that a tent be sent. Court sessions were conducted in the tent for most of 1878, until the court moved into the newly completed Customs House. As the population increased, it became obvious that a purpose built court house was necessary.

When Port Douglas was surveyed, land on the southern side of Wharf Street was reserved for Court House and Post Office purposes. However by the time the plan was released, a building was already constructed on this site. The owner of the building was offered the land and the Court House was subsequently constructed on the opposite side of Wharf Street.

The building was designed by the Colonial Architect's office to suit the climate and the functions of a court house. It comprised a rectangular core with the court room at the front and two offices at the rear with verandahs to all four elevations. Access to the verandah was via a centrally located stair at the front. Additional sets of stairs were located at the eastern end of each side elevation.

Tenders were called in May 1879 and although local builders were among the tenderers, the contract was won by Brisbane builder Thomas Watson, probably as he was experienced in building court houses, primarily that at St Lawrence the previous year, which was similar in design.

Watson began construction in September and the building was completed in November at a cost of £475. The completed building differed slightly from the original plan in that it did not have a dividing partition between the rear offices, resulting in one large office rather than two smaller ones.

In 1880, the rear corner of the verandah was enclosed to provide a jury room. Complaints had been made by Judge Hely in 1879 regarding the lack of a jury room and approval to incorporate one at a cost of £20 was given in September 1879. Thomas Watson, who had stayed in Port Douglas to construct a number of other government buildings, completed the addition in May 1880. Thomas was again employed when the new jury room was found to be too small and the central section of the verandah at the rear of the office was extended and enclosed to create a more suitable space.

In the following years, much of the verandah flooring and almost all of the stumps were replaced due to deterioration inflicted by the weather and white ants. No major alterations were made until a cyclone in 1911 almost destroyed the building. 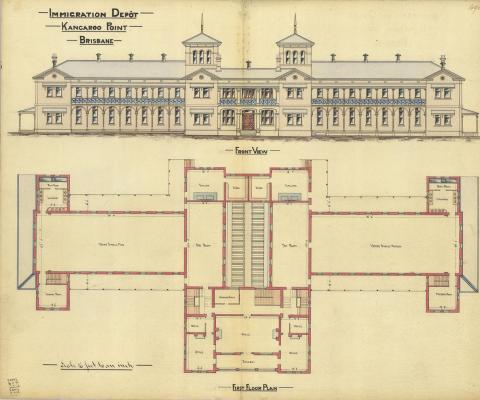 Architectural drawing of the Immigration…