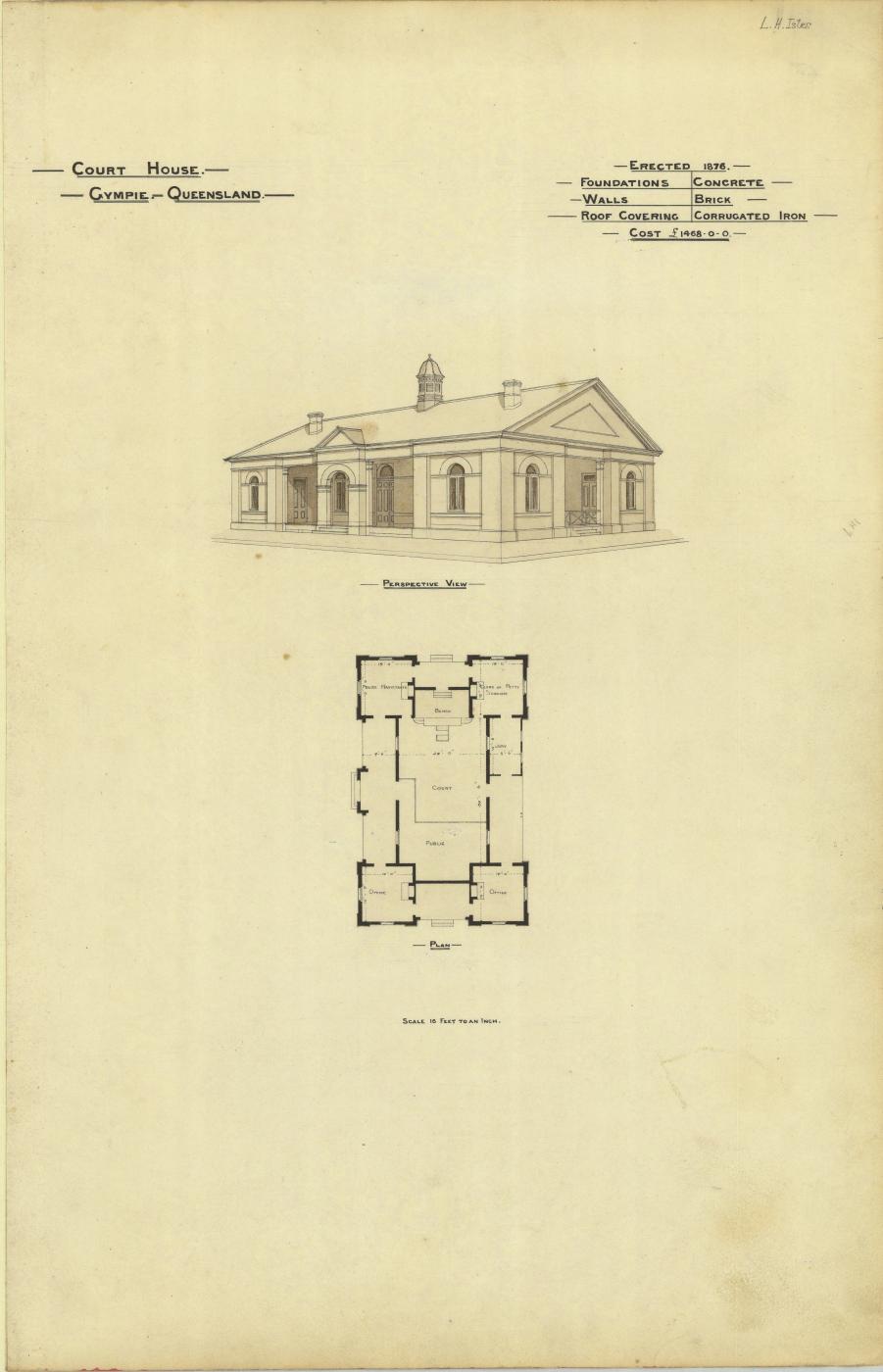 Tenders are now called for a new court house at Gympie, to be placed at the corner of Channon and King streets, with a frontage of 135 feet to the former and 238 feet to the latter. The site is the highest in the street (?) and commands a view of the whole town. The principal entrance to the ground will be at the angle of the streets. There is an independent entrance on either side. The courtroom, occupying a position in the centre of the building, will be 52 feet long and 3 feet wide, and will have all the necessary fittings. Ample space is provided for the public. On the side nearer King street, office accommodation is to be provided for the Police Magistrate, the clerk of petty sessions, and clerks, as well as a room for the jury. On the other side rooms are to be provided for the Judge, witnesses, barristers, and mining registrar. The building will be of brick, local if possible, the architectural features being in stone. The treatment throughout is to be very simple in character, the effect depending more upon proportion of masses than detail of ornament. On the left-hand side of the entrance it is proposed to erect a simple campanile (or tower); about 80 feet high, into which it is proposed, eventually, to place a public clock, the site being eminently suitable for that purpose, as the clock will be seen from all quarters of Gympie, which can not be claimed for the present public clock.

The second Gympie Court House was built during 1875 and 1876 in Channon Street. The classical revival style brick and stone building was designed by the Colonial Architect's Office, and was extended in 1893 to include the Gympie Lands Office. It was the first substantial public building constructed in the town which developed at the site of Queensland's first major productive goldfield. The only known surviving earlier Queensland court houses (purpose-built) are in Ipswich (stone and brick, 1859, QHR 600575) and Toowoomba (its first, brick, 1863, QHR 601315). Also present on the site, behind the main building, are an 1882 strongroom and a 1942 air raid shelter.

As it evolved from a hastily established mining settlement, Gympie developed a distinctive character with an irregular street pattern amid a series of valleys and ridges. Existing buildings and mining homestead leases were accommodated in the first survey of the township in April 1868. Development of roads within the township of Gympie followed the terrain rather than adopting the standard grid pattern that was applied to townships surveyed for settlement, and consequently many roads run along ridgelines with linking roads across valleys and hillsides. The early makeshift structures of 1860s Gympie gradually gave way to more permanent and substantial public and private buildings, including government buildings on Channon Street from the mid 1870s.

The first government buildings in Gympie - the Gold Commissioner's Office, Powder Magazine and Post Office - were built in 1868. The Gympie Gold Commissioner, Henry Edward King, (also Secretary for Public Works and Mines from November 1874 to May 1876) initially conducted his court in temporary structures, and the first permanent mining court was a slab and shingle-roofed building near Cross Street, northwest of the Surface Hill Uniting Church. A Court of Petty Sessions, Commissioner's Camp, Mary River Gold Fields, was proclaimed by the Governor in Council on 20 February 1868, and by 1869 there was a court house at the corner of Duke and Channon Streets, on Commissioner's Hill (on the site of the town's third Post Office). The town's second Post Office was located just northwest of this court house. The 1876 court house (the second Court of Petty Sessions in Gympie) was built on the site of the original police lock-up and stables, on the north side of Channon Street between Duke and King Streets.

Planning for this new court house began in 1874. In December of that year EH Harries, a draughtsman with the Colonial Architect's Office, reported that a new Gympie court house of brick with stone foundations, with a court room 40 feet by 24 feet (12.2 m by 7.3 m) and offices for the Police Magistrate and Clerk of Petty Sessions, would cost around £1,500. Tenders were called on 23 December 1874 and the £1,468 tender of Andrew Collins, a builder from Red Hill, Gympie, was accepted in a Memorandum of Agreement with the Secretary of Public Works (HE King) on 13 March 1875.

The new court house was finished in April 1876. The Brisbane Courier's Gympie correspondent reported that to celebrate a grand calico ball would be held there on 19 April. The building was described as a substantial, commodious brick edifice which appeared to be fitted up with every convenience suitable to the purpose for which it was designed.

However, this was not the case and inadequacies were reported. By June 1876 the building was occupied, but due to a lack of fittings the Police Magistrate had to convey his documents to the old court house. On 1 July 1876 the Brisbane Courier's Gympie correspondent commented on the bad acoustics of the alcove behind the bench, stating that 'sounds as if a multitude of voices were speaking at the one time were heard all over the building, and caused much confusion ...directly a word is uttered, it is immediately sucked into the alcove, and smashed into fragments against the walls, the pieces being hurled back at the speaker'.