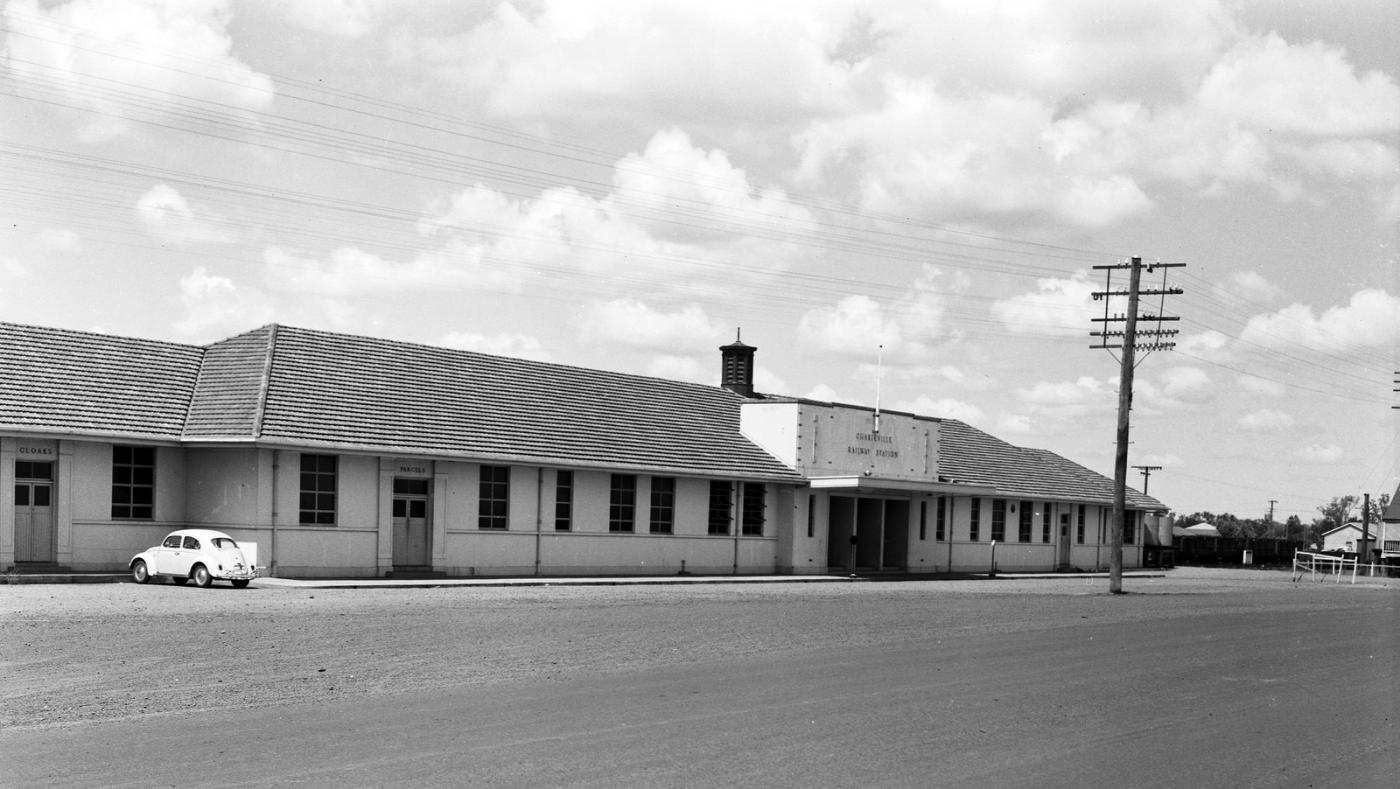 Charleville Railway Station was established by the Queensland Government in 1888 as part of a rail link to service Western Queensland. Structures of cultural heritage significance at the station include the passenger station, opened in 1957 and the goods shed, the core of which was completed in 1888. These structures reflect the historic importance of Charleville as a western railway station.

In Australia, government fostered the development of railways as a means of developing the country and providing social benefits. It was argued that rail would reduce freight costs and save travel time for passengers. An added incentive for rail development in Queensland was the very poor state of the roads. In wet weather especially, this hampered the transport of freight. Railway development became the province of government because of the doubtful economics of building and operating a rail service for the widely distributed, sparse population of rural Queensland. In most cases the capital costs were high in relation to the potential revenue likely to be raised from passengers and freight. These economies imposed a limit on the expansion of railways into remote areas.

The government initially gave priority to developing a railway west of Brisbane. As well as providing graziers and farmers with a more efficient transport link to the coast, railways were seen as a key to encouraging closer settlement west of the Great Dividing Range. The first section of rail, opened on 31 July 1865, was between Ipswich and Bigg's Camp, 34 kilometres west of Ipswich. By February 1868 the rail was extended to Dalby in the Darling Downs. With a railhead provided for the squatters in this region, extensions further west ceased while the railway was developed elsewhere. It was 1876 before construction of the railway westward from Dalby recommenced. The rail was opened to Roma in 1880, Mitchell in 1885 and Charleville on 1 March 1888. With the opening of the rail to the west, the train became an important transport link for passengers and freight.

There were a number of factors that contributed to Charleville's importance as a rail terminus. Situated on the banks of the Warrego River, a natural stock route from New South Wales to Western Queensland, Charleville was already an important regional centre. Moreover, it was to remain the main western rail terminus for at least a decade. The economies of extending the line further west were doubtful. In any case the depression of the 1890s precluded further railway construction for some years. An extension to the line was opened in 1898. However, it was designed to intercept cross-border trade with New South Wales so it was south southwest from Charleville to Cunnamulla rather than west. A further development west did not begin until 1911 when a line to Quilpie was commenced as part of the ill-fated Great Western Railway scheme. Until the opening of this line in 1917, Charleville remained the most western railhead. Also, Charleville was made a locomotive depot due to its distance from the closest existing facility at Roma.

Charleville's importance meant that the station was provided with more than the usual station facilities. By August 1888, most of the station structures were completed. These included platform, tank, booking and telegraph offices, goods shed, stationmaster's house, and guards, enginemen and firemen's cottages. Engine and carriage sheds were moved from Mitchell to Charleville. Cattle and sheep yards were in place by January 1889 and by 1916, a 50-ton weighbridge had been added to the complex. The weighbridge currently on the site is 40 tons and appears to post-date 1976.

The original wooden station building was destroyed by fire on 6 July 1954 and the engine shed was blown down in a severe windstorm in October 2003. Most of the other 1888 buildings appear to have been either removed or demolished.

The Goods Shed has survived a serious fire and has undergone significant modification. On 4 April 1900, a fire destroyed the entire contents of the Goods Shed, then rented from the Government by N Nielsen. It seems that no substantial modifications were made to the structure as a result of this fire. The shed has been upgraded at least twice since that time. In the 1920s, an extension of some 12 metres by 3.7 metres to the platform at the eastern end was approved. Then in 1962, major white ant damage in the office and deterioration of the timber platform was reported. Repair work was delayed because a complete rearrangement of the yard was under consideration but as this did not proceed, tenders were called for renovations in 1974. Substantial changes were made to the structure including a new goods office, reconstruction of much of the timber platform, a new concrete platform and a new toilet.

Following the destruction of the original passenger station, a new station building was opened in 1957. It was designed by Queensland Railways Department's architectural office under the supervision of Charles Da Costa and erected by K D Morris and Sons, Brisbane. Da Costa had been a specialist in re-inforced concrete design for at least thirty years. He trained as a pupil of T. S. Martin of Sydney from 1905, joining Queensland Railways in 1907 as a Junior Draftsman. After retrenchment in 1921, he began private practise as an architect and structural designer in Brisbane. Later he worked for Burns Philp and Company and then, in 1935 rejoined Queensland Railways as an Architect. He became Principal Architect in 1938 and retired in 1955. Charleville Railway Station may have been one of his last designs before retiring.

The building was more substantial than its predecessor. It was built in an era of economic prosperity augmented by a wool industry that was booming in the mid-1950s and in an environment of Government investment in post-war rehabilitation of rail infrastructure. However, at the opening ceremony, the Honourable T Moore indicated that the new building also reflected the continued importance of Charleville as a western railhead:

'Mindful of the important contribution made by the Charleville district to the earnings of the Railway Department (the revenue from outward and inward traffic for the last financial year totalled £ 246, 856 and £ 186, 369 respectively) and the wealth of the State generally, the Government decided that the wooden station building which was destroyed by fire in 1954 should be replaced by a modern structure, worthy of this prosperous and progressive town and district, one which would meet, for many years to come, the increasing needs of the Department's customers and a building which would provide the maximum of comfort for travellers to and from the West...'

Charleville was the third busiest goods station on the Western Line after Quilpie and Cunnamulla and the busiest passenger station at the time, earning £26 810 in revenue from passengers in 1954/55 ahead of Roma (£17 346) and Dalby (£10 816).

The station, as designed in 1954, was a large building almost 92 metres long and 12.5 metres wide with a 162.7 metres long concrete platform shaded with cantilever awnings extending well beyond the northeastern end of the building. A 46 metre long loading dock was built at the north end of the building with access to King Street. The entrance opened to a spacious terrazzo tiled vestibule located in the centre of the building. Some 26 other rooms made up the building including Tranship Room, Cloak and Luggage Room, Parcels Office, Station Master and Assistant Station Master's Offices, Clerks' Office, Telegraph Room, Ticket Office, Ladies Waiting Room, Refreshment Rooms, Store Rooms, Guards and Porters' Rooms, Mail Room and Lavatories.

The design of the building, according to Moore, was influenced by the local climate. The reinforced concrete walls were designed to insulate the interior against extremes of temperature. The building was provided with projecting eaves to provide shade and large windows to capture breezes.

The furniture in the building, a quantity of which is still extant, was manufactured partly by contractors and partly by the railway's Northgate workshops.

Charleville is the only station of its design on the Queensland Rail network. Hughenden also has a large concrete station. However, it was built some ten years earlier than Charleville, is less than half the size and is made of pre-cast concrete beams not reinforced concrete.

With the greater use of other modes of transport such as road and air coupled with a decline in rural population, passenger numbers on the Western Line have declined sharply since the 1950s. Passenger traffic through Charleville is now much less than it was when the station was built in 1957. 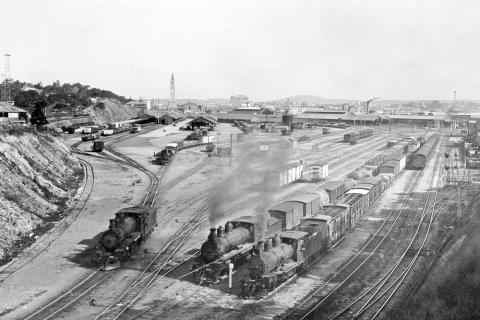 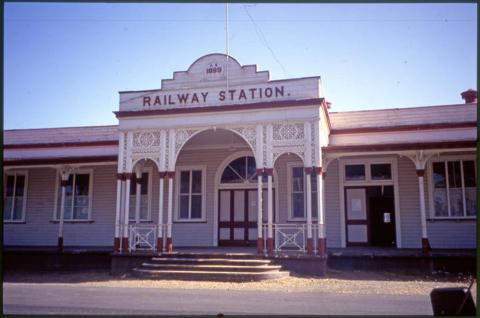