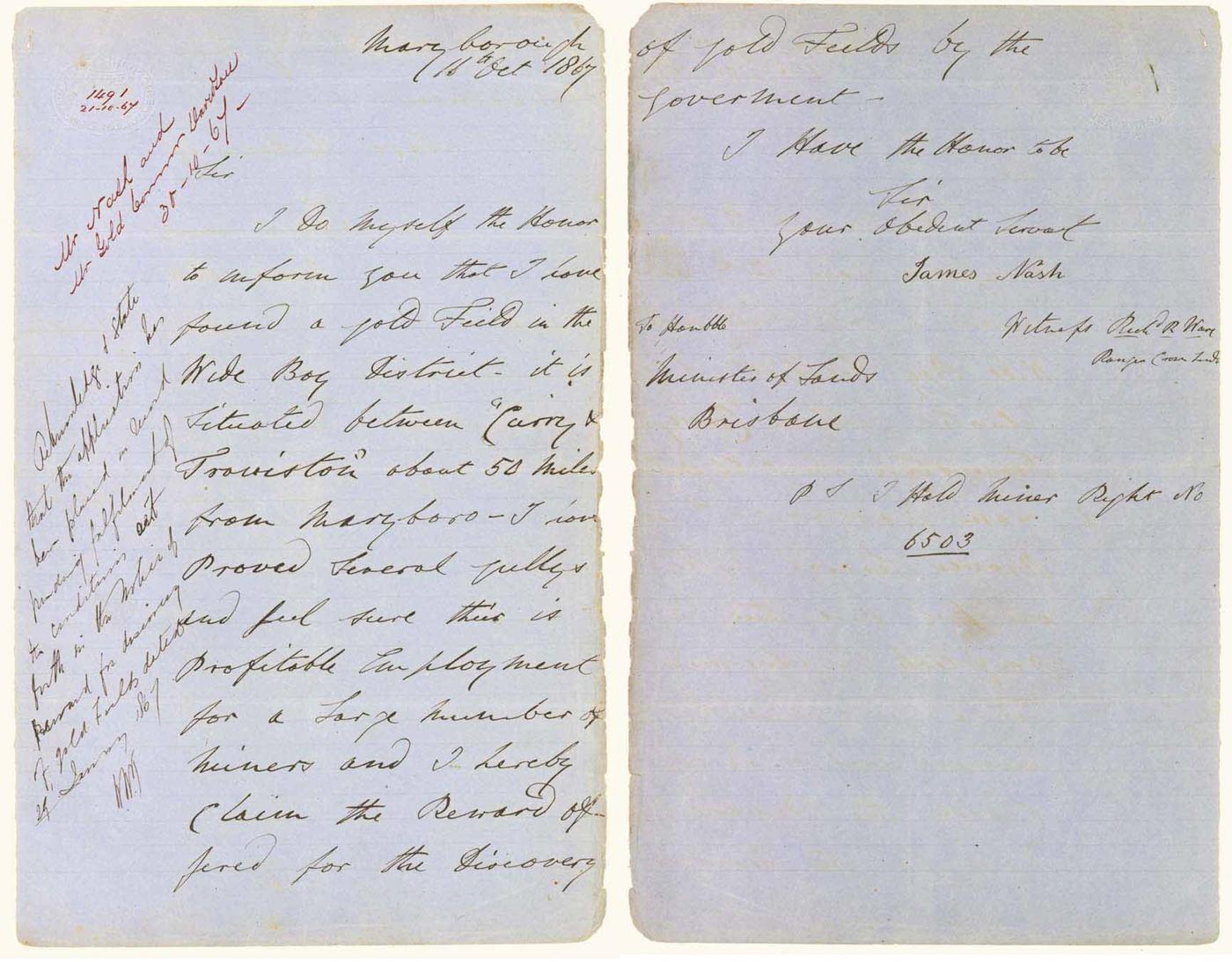 I do myself the honour to inform you that I have found a gold field in the Wide Bay District. It is situated between Carry? & Traviston about 50 miles from Maryborough. I have proven several gullys and feel sure there is profitable employment for a large number of miners and I hereby claim the reward offered for the discovery of gold fields by the government.

I have the honor to be your obedient servant.

The accounts from the diggings vary very much, but on the whole are of a cheerful character. On Wednesday, Nash the prospector, brought into Maryborough 120 ounces of gold, including a nugget which weighed 50 ounces, and several small parcels of gold have also been brought down. There is a good deal of gold reported in the diggers' hands waiting for escort.

From some of our townsmen, arrived in town last night, we learn that Mr. C.J. Browne picked up, on Thursday morning, a nugget weighing over 2 lbs. A creek had been discovered some six miles away containing payable gold, and it was reported that, a good many persons coming from Brisbane, had set in to work there. It is a fortnight to-day since the visiting party returned and reported a gold field existed; this is the second creek discovered since. The diggings are thus extending, which is one of the most satisfactory things we can say of them. The richness of the field will not be properly tested until after a plentiful supply of rain, for very little "washing-up" will take place until then, or very little prospecting be done. The following letters from correspondents on the diggings will supply other information: — Mary River Diggings, Monday, October 28. Sir, — My firm belief is that an extensive and payable gold-field will be developed here; gold is found here, there, and everywhere, but we want water. There is a report of some men working about 15 miles away, and I am prepared to believe it, for the country is auriferous; slate quartz the prevailing rocks. St. Ledger washed a load of stuff as a trial, and got 6 ozs, and has plenty more to put through the cradle. Nash and the other two men, first on the ground, have, since their commencement, sent down to Maryborough 320 ounces of gold. If there should come rain, I think the next return will astonish you. Nash's Creek, Thursday, 1 p.m. Mining operations continue to develop other branches of trade and employment — amongst the rest, three shanties, two butchers' shops, three or four branch stores from Maryborough, and (in prospective) a blacksmith's shop. Nash's Creek, with its tributaries, Skipper's, Sailor's, Snob's, and Ledger's gullies, are being fast worked, and in another week all, with the exception of the prospecting claim, will be worked out. In many instances a forty-foot claim is worked for two loads of wash dirt, and some of this dirt I have seen washed for two pennyweights to the load. The St. Ledger claim attracts everyone's attention. The fortunate owners will have by this time netted something like £150 per man for little over one week's work. This instance of good luck is isolated from the general run of fortune amongst all, if we may except the prospector Nash, bis brother, and few friends, who, I hold, are best entitled to the lion's share. A new gully, three miles long, has been opened by Mr. George White, farmer of Mary-borough, and after whom it has properly been named. A prospecting claim has been granted to Mr. White and the prospects are very fair with him. In other parts of the gully, above and below, the prospects are very variable, leading one to sappose that the patches of duffer-ground prevail. At the extreme bead of the gully some splendid prospects are being obtained, but from the extreme narrowness of the ravines very little wash-dirt will be obtained. A man named John McCarthy, soap-boiler, of your town, and his mate Craven, obtained yesterday a 7oz. nugget, and other pretty pieces are daily turning up in the same locality. Water is the great desideratum, and in its absence very little can be done by way of prospecting, or in washing the golden dirt already obtained. There is a very large extent of surfacing ground which, with plenty of water, may— I believe will, be made to yield the precious metal in payable quantities. Some splendid specimens of quartz stones are being daily obtained, but nothing definite in the shape of a reef has as yet been discovered. There is little probability the continuation of Nash's Creek will prove payable. For six claims below the prospector's, the ground is being worked, but lower down nothing can be made of it. Although a great deal of prospecting is being carried on, a little gold rewards the prospector in almost every instance.

The country tor miles around presents much the same appearance. A bold, well-defined ridge extends for miles to north and south, the ravines leading from which naturally present the likely places to prospect, and already many of them have been pretty well searched. Mary-borough men are clearing out by the dozen, but their places are being filled up by men of experience who have come to do, not to see. Mr. Commissioner Davidson fills his new post in an admirable style. The following, taken from the Guardian, is an encouragement to prospecting: — The steamer "Leichardt," which arrived yesterday from Maryborough, brought 114 ozs. of gold. Messrs. Flavelle and Co., of Queen-street, are now exhibiting a specimen of the precious metal, in the shape of a nugget weighing 10 ozs. 17 dwts. It is a fine sample of surface gold, and it contains, we should suppose, about 8 ozs. of pure metal. A gentleman, who has had eight years' experience of gold mining in Victoria, communicates with us as follows: — "I saw the nugget in Flavelle's window this afternoon and recognised it at once as a piece of surface gold. From the appearance of it I believe that it is as strong an indication of a gold-mining country as I have ever seen, and I consider that all the district where it came from requires, is a thorough prospecting, which will, no doubt, disclose a payable lead of gold. The diggers appear to be only directing their attention to surface digging and not to sinking, but I never saw surface like that at Gimpie Creek where a large gold-field did not exist adjacent to it. This was always the case in Victoria where all the principal fields were dis-covered through tracing the surface finds." The Courier continues its efforts to rouse up the mob power of Brisbane, to compel the Government to make a road from Brisbane to the diggings, so as to divert the trade from Maryborough ; but unless the Government can invent a method of making two miles into one, and are prepared to level mountains, and bridge innumerable creeks, almost rivers in width, the traffic will still flow through Mary-borough, in spite of all the Courier can do. The Courier describes the road from Mary-borough to Currie, even in dry weather, as impassable, through the density of the scrub in many places. There are scores of persons in Maryborough who have made the trip in two days on foot, and many who have done it on horseback in a day, and the road cannot, therefore, be a bad one ; as a fact, all report it a very good one — one of the best bush roads in the colony ; there are two creeks which are a "bit of a pinch" for drays, but £300 would carry rough bridges over both of them. Sooner, however, then the traffic should come through Maryborough, the Courier would prefer another port should be opened at Mooloolah, and urges this route should be tried. By the Guardian we see the attempt was made, but the mining population was not to be gulled to travel that way for the barren purpose of venting the Courier's spleen on Mary-borough, any more than Brisbane merchants will send their goods by that way or overland for the same purpose, The Guardian says : — The 'Tadorna Radjah' left Pettigrew's Wharf yesterday morning for Mooloolah, and it was generally thought that a number of per-

sons who intended to try their luck at the new diggings would have taken their passages in her, for the purpose of testing that route. Contrary to expectation, however, the only passengers who went by her were Mr. Pettigrew and Mr. J. Wilson, but we are not aware whether it is their intention to proceed to the diggings. It will be seen in another column that our member takes up the cudgels for us, and administers a severe but well-deserved castigation on the Courier, for its persistent efforts to disparage this community and injure its commercial interests. The road from Maryborough was opened by Mr. Buchanan, surveyor, of this town, in 1859. The following report of the route presented by him to the Government in that year may be interesting: —

For the first twenty-five miles of its course the line passes through an open undulating, well-grassed country, interspersed with scrubs in patches of no great extent, and although the season has been particularly dry, water was plentiful everywhere. At this point the road ascends a spur of the Bappaul Range with a tolerably easy gradient ; thence following the top of the range for seven or eight miles, descends into fine open broad-leaf ironbark country on the bank of the Mary River. The river at this point is a clear running stream, forty yards in breadth at the water level, and from two to four feet deep — both sides are fringed with cedar scrub. From this point for a distance of three or four miles the country is ridgy, not so well grassed and more thickly timbered. Arriving at a high main spur from the coast range, the road ascends to the summit by means of a long leading spur. From the top of this ridge an extensive view is opened to the east and south, of the country between the line of road and the sea coast. The whole of this country appears broken and impracticable, and fully accounts for the failure of the late Commissioner Bidwell in his attempt to carry a road through it. On descending the range by an easy spur, the country is well grassed and open, and well-watered by chains of large waterholes to the crossing of the river about fifty-five miles from Maryborough. On crossing the River Mary the track leads through the run about to be occupied by the Messrs. Lawless [this station, Imbill, was shortly occupied by the Messrs. Lawless, and it is now a large cattle station] as a cattle station. Passing in succession Bunya, Yabber, Gobee Creeks, we arrived at Mr. Parkinson's head station on the Oobee Oobee Plains, about seventy-five or eighty miles from Maryborough, where this line joins the road to Brisbane.

Gold was first discovered near Gympie by John Carne Bidwill, first land Commissioner of Wide Bay, in 1851. Little interest was taken, however, until an itinerant prospector named James Nash revealed the extent of the deposits in 1867. Nash's announcement of a payable goldfield came at an opportune time, for Queensland was in the throes of a severe economic crisis, and the town which arose on the banks of the Mary River was hailed as the colony's saviour. The alluvial gold had disappeared within a year, but deep sinking began to tap the massive underground reserves and create an air of permanency. Two separate townships, One-Mile Creek and Nashville, were soon amalgamated into a single town known as Gympie, an Aboriginal word for the stinging tree which grew profusely in the district. Gold mining finally reached its peak at Gympie between 1900 and 1910 before it began to decline. While limited mining operations continued until recent years, Gympie's prosperity has long been based on agricultural production in the surrounding districts.