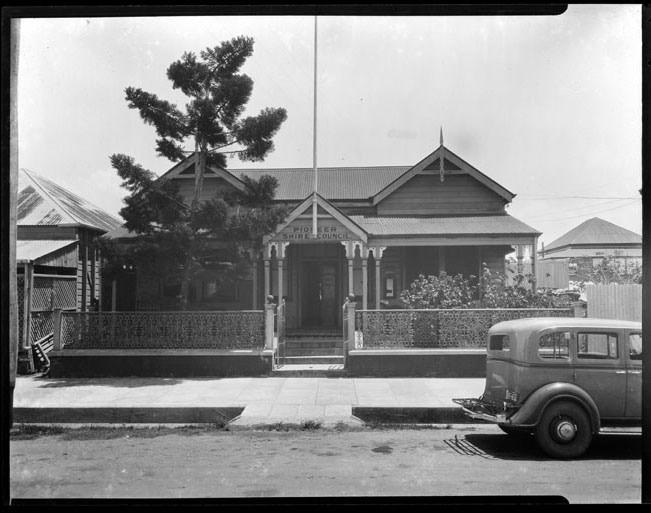 During the day the Chairman of Pioneer Shire Council (Cr E Evans) and the clerk (Mr A S Cowley) interviewed the Premier in connected with matters affecting the shire. They introduced the question of a further loan to complete the fittings in the Shire Council building. The Chairman also spoke on the matter of Slade Point allotments and the Council’s proposal to build a new road to this resort, off the harbor road, effecting a saving in distance from Mackay of about 2 ½ miles. Some allotments, he added, were to be offered for sale, and at present there were residences at Slade Point to which the occupiers had no tenure. The Council desire that the Slade Point area should become revenue-producing, Cr Evans also asked that the work of widening the road between Barnes Creek and the Sydney-street bridge should be expedited. He pointed out that the road was now carrying heavy traffic, and the number of accidents occurring on it testified to the fact that it was dangerous. He expressed the Council’s appreciation of the Government’s decision to proceed with the erection of the new Sydney-street bridge, and expressed pleasure in the fact that the difficulties which had arisen had been overcome satisfactorily.

The Premier promised to give careful consideration to the matters touched upon. With regard to Slade Point, he said he would request the Minister for Lands (Mr P Pease) to make a personal inspection when he visited the district in about a fortnight’s time.

During the morning the Premier also granted a number of private interviews.

In the afternoon he was accompanied by the Chairman of the Harbor Board (Mr C F Bagley) on a tour of inspection of the outer harbor works.

The Premier will leave Mackay for the south by this morning’s mail train.