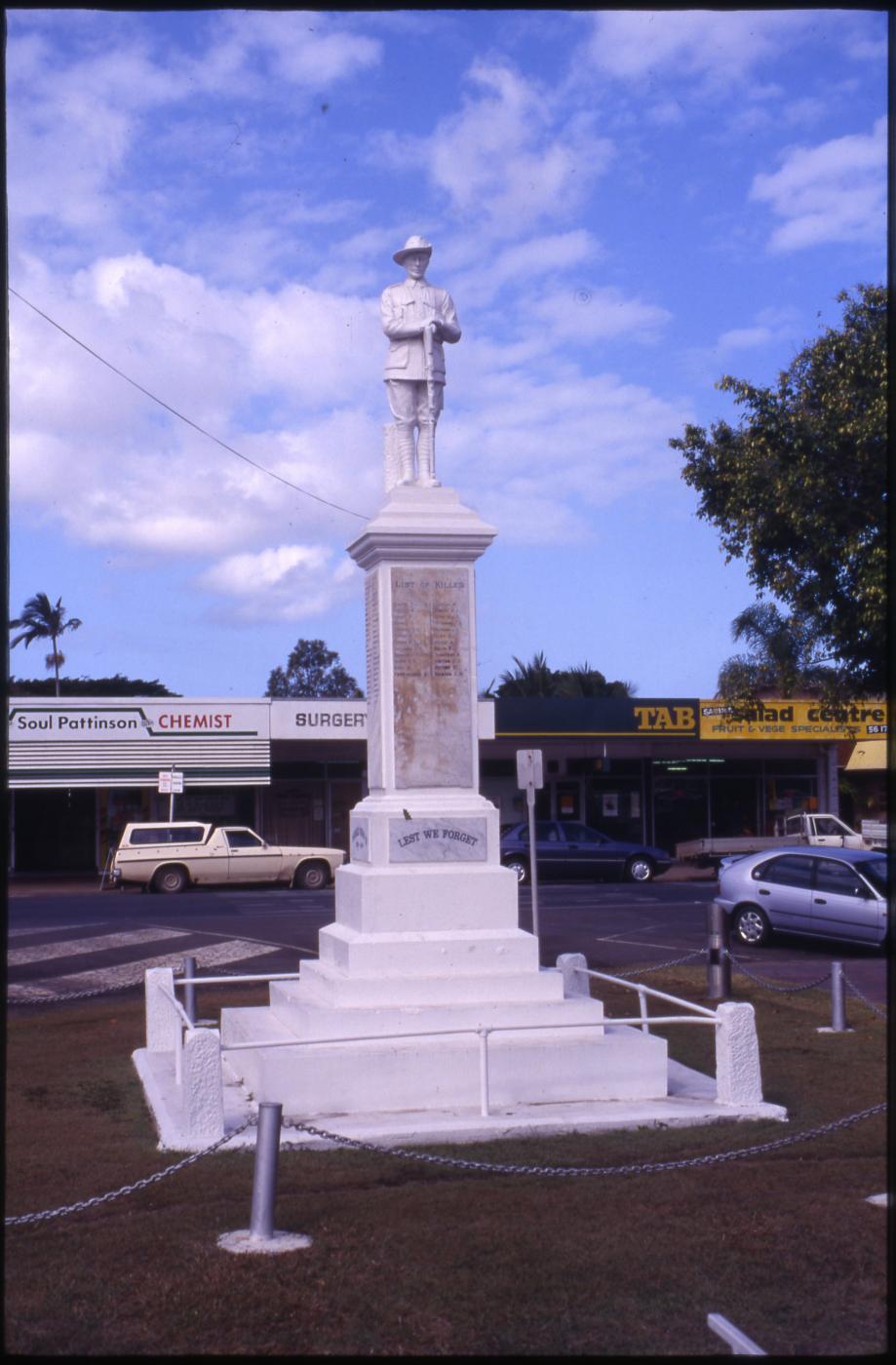 The Returned Soldiers' League and Shire Council are to cooperate in beautifying the surroundings of the Soldiers' Memorial situated in Broad-street. This decision was reached at the monthly meeting of the Council yesterday, when the two bodies agreed to an estimated expenditure of £60, to be borne on a 50-50 basis.

Messrs. J. Langdon and T. Patch attended the council meeting as a deputation from the League. Mr. Langdon said the monument had been erected by the public, and the League considered that its upkeep should be the duty of the council as representing the citizens. The League also was interested and was prepared to assist the council in making permanent Improvements.

The chairman said the council no definite scheme in view for Improving the monument. The council would like the views of the League on the matter.

Cr. W. G. Hamilton said that something should be done to the memorial.

As each Anzac Day approached they had to rush round and clean up in the vicinity of the Memorial. If a permanent job was done there would be a saving of that expenditure. The memorial did not actually belong to the council and it should not be expected to look after it. Something would have to be done as cars were travelling too close to the memorial already, and it was only a matter of time and they would be running up on the base of the monument itself.

Cr. J. P. Olsen said he did not agree with Cr. Hamilton that the maintenance of the memorial was not a matter for the council. The public should not be asked to keep it in order; that was the duty of the council.

Cr. Hamilton said the people would have to foot the bill just the same if the council paid for it as the money would have to come out of the rates.

Mr. Patch said he had prepared a plan of the proposed improvements. They comprised a number of concrete columns, linked by chains, and a lawn. The measurements of the fence would be 40ft. square. The League was prepared to bear the cost of cement and put on the labor provided the work was confined to returned soldiers. The council would be expected to provide the tools, do the carting, and connect water. It would also expect the council to assume responsibility for the maintenance of the lawn and memorial, though the League would be prepared to pay for any work done so long as it had funds.

Following a general discussion in which Cr. R. Palmer contended the council should be given the right to supervise the work, it was decided that the council agree to pay 50 per cent, of the cost of the improvements, which are to be carried out under the joint supervision of the shire chairman and a representative of the Soldiers' League.

The League is to pay for the work and be recompensed by the council for half the cost in the next financial year, no provision having been made in the current year's budget for the work.

Mr. Langdon thanked the council for having received the deputation.

The chairman thanked the deputation for having attended and made such a generous offer in relation to the proposed improvements.

The Sarina War Memorial was erected for the ANZAC Day ceremonies of 1919 and was produced by monumental masons of Townsville, Melrose and Fenwick. Funds for the memorial were raised by public subscription. The memorial honours the local men of Sarina and the surrounding district who served in the First World War.

Up until the early twentieth century, there were few statues or monuments in Queensland. However, as a result of the First World War (1914 - 1918), memorials were erected in almost every Queensland town. Such public expression of both grief for the dead and pride in the nation has not been generated by previous or subsequent wars.

The First World War had an immense impact on the Australian population. Of those who went to war, almost one in five did not return. It was common for families to lose more than one son and for small communities to lose a whole generation of men.

In 1916 the British Government prohibited the exhumation and return of bodies. This, coupled with the impracticality of visiting distant graves ensured war memorials became an expression of public mourning, revered as cenotaphs (literally meaning 'empty tomb') by those who erected them. Placed at prominent locations, they became symbols of remembrance and were considered to be as sacred as grave sites. As such, materials, design principles and symbols suggesting permanence, reverence and commemoration were important elements.

Most statues were constructed by local masonry firms, although some were by artists or imported They varied slightly in design, presumably to suit the needs of the communities who commissioned them.

Melrose and Fenwick, the makers of the Sarina memorial, were a monumental masonry firm established in Townsville in c1896 They were a large firm with branches throughout Northern Queensland, and provided many war memorials to that area. They enjoyed continued success into the late 20th century, with the business closing in the early 1980s.