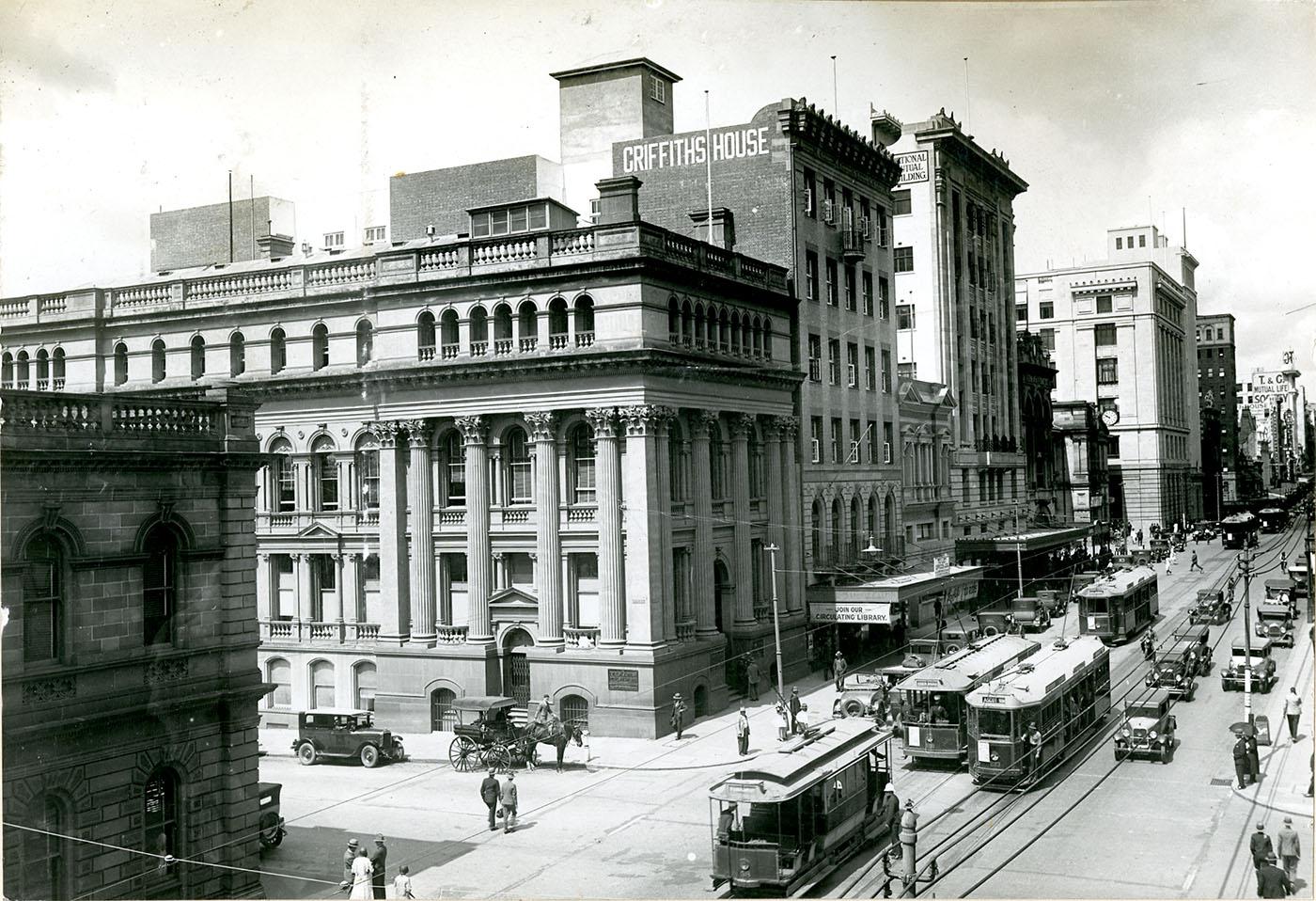 Fire swept the upper portion of the Colonial Mutual Life Assurance Society Ltd's.  building in Queen Street shortly after 10.30 o'clock last night. Damage was done to the extent of thousands of pounds. The General Post Office and the new National Mutual Life Assurance building was threatened by the flames, and were saved only after strenuous work by the Metropolitan Fire Brigade.

Tongues of flame licking avidly at the roof and the upper walls of the building at 10.35 p.m. attracted the attention of William Colley, taxi-driver, and William Keating, of Country Press, Ltd., and they communicated with the Metropolitan Fire Brigade simultaneously. Within a minute two reels were on their way to the scene of the conflagration, startling homeward-bound theatre patrons with their strident warnings as they careered through the city streets. Attracted by the dull glow in the sky above the General Post Office, and the rolling billows of black smoke that poured into the chasm that was Queen Street, dense crowds rushed headlong to the scene, and for a moment all was confusion. Traffic was held up as excited pedestrians seethed and moiled in the vicinity of the Post Office, but order was quickly restored and the firemen were given every facility for work.

The big "Major Carter" ladder was quickly brought into operation, and shot into space for its extreme length, its apex reaching the parapet of the burning building. A fireman, carrying with him a heavy hose, quickly ascended, and the excited crowd roared its approval as a thick jet was directed at the fire. The Bayley ladder, on its two-wheel carriage, was quickly trundled to a point beneath the first floor veranda of the Post Office, and in a few moments three lengths of hose were in effective action. It was essential that efforts be made to save the G.P.O. and several firemen were detailed for that work by flooding the mail sorting room. Others poured water into the blaze, clinging wherever they could secure a foothold, and directing their operations through the upper windows of the burning building.

It was evident from the increasing volume of smoke and the increased roaring of the flames that the streams of water were not reaching the heart of the fire. Led by Deputy-Chief Officer Garvin, the firemen rushed to a small annexe connecting the Post Office with the adjoining building. The doors leading to the Mutual Life building resisted assaults, and the firemen next tried the half-glass doors Ieading to the room of the Minister. In a minute the way was open for a better control of the fire. Two hoses were dragged through the office by the firemen, who clambered on to the roof of the annexe and strong jets of water were poured into the heart of the fire. Gradually the flames sank lower and lower, and soon the most serious part was under control.

Meanwhile two cleaners in the National Mutual Building were busily engaged with emergency hoses on each floor of the threatened building. The water was directed through light cavities between the two buildings, the timely endeavours of these two men greatly assisting the firemen on the other flank. The first and second floors of the new building were flooded, but no great damage was done.

By 12.15 a.m. the fire was under complete control, and a survey of the bundling was possible. Two big rooms had been almost completely destroyed, while the roof above them had been lifted in several places. Pieces of the plaster ceiling which had been reduced to pulp littered thte floor. Although the front of the building escaped practically any damage from the fire itself a deal of the water found its way through the passages, and all the rooms on the second and ground floors suffered damage. A great deal of stationery was destroyed, and some furniture was ruined. The occupiers of the rooms affected were the Colonial Mutual Life Assurance Company, Drs. Eric Mole and Ferguson, Messrs. A. P. Bedwell, Neville Lyons, J. H. Feather and Ray White. The Gainsborough Gallery, the La Roche Salon, and the premises of Messrs. W. H. Green, Limited, chemists, were also damaged.

There was a gas heater at the rear of the top floor, and though nothing is definitely known, it is thought that the fire might have originated there. The Chief Officer of the Metropolitan Fire Brigade (Mr. W. Younger), who directed operations during the fire, said this morning that, from a survey of the ruined portions, it appeared as though the fire had started in the salon.

Mr. Walter Travers, manager of the Colonial Mutual Life Assurances Company, said that the building and its fixtures were insured, but he was unable to give any particulars. He estimated the damage caused by fire and water at thousands of pounds.