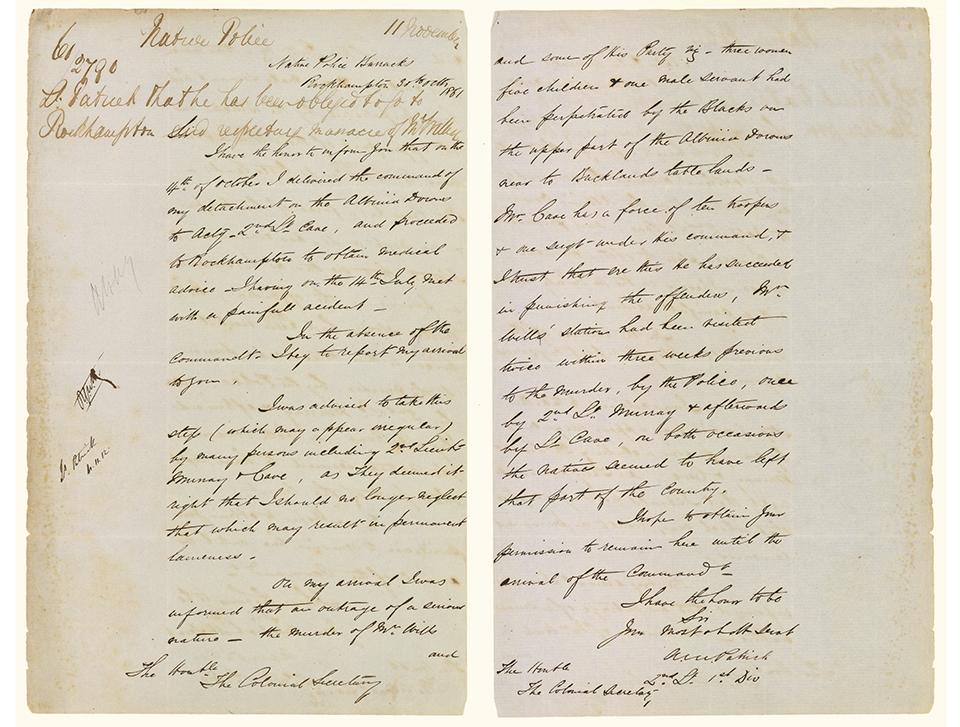 About one o'clock on the morning of the 18th October, a servant in the employment of the late Mr. Wills arrived at Rainworth, Mr Gregson's station, Nogoa with the information that Mr Wills' station have been attacked by blacks on the previous afternoon, and all the party, so far as he knew, with the exception of another man and himself, killed. From his statement it appeared that the black had been frequently at the station for some days previous to the attack, but as their intercourse with the blacks was apparently of the most friendly character, no danger was apprehended from their presence, and no adequate precautions taken against suprise and violence. On the day of the attack, the blacks had been about the station before mid-day, and then left it. At this time the informant states that feeling tired and exhausted with the heat he had lain down in the shade of a bush to have a rest - a circumstance to which he owes his escape from the terrible doom that awaited his companions.

Having fallen asleep, he was awakened by the noise of loud and violent talking on the part of the blacks, and on looking out from his hiding place, which only commanded a limited view of the scene, he saw several of the blacks attack one of the white women, who fell beneath their blows. Screams, shouts, and the dull crash of terrible blows followed, and told that the work of death had begun. In this midst of this one shot was fired, but apparently without effect, and the necessity of screening himself from observation prevented him from seeing who fired it. Probably however it was done by Mr. Wills, as one chamber of his revolver was afterwards found discharged.

He waited in his place of concealment until a flock of sheep without a shepherd came in at sundown, when he crawled amongst them and crept on hand and knees through the flock until he reached a better place both for concealment and observation. The man shepherding the ram flock then came home with his sheep, and the two men went up to the tents, where they found a horse ready saddled and tied to one of the drays. Both men were thus eager to avail themselves of the means of escape thus presented to one of the and the dreadful disappointment of the one and the scarcely less terrible joy of the other, must have presented a contrast of human feeling but seldom equalled in intensity. The informant was the fortunate man and started immediately for Gregson's, the other stating his intention to hide somewhere until relief should arrive.

To discover more of this article.

After acquiring considerable wealth through grazing, Horation Wills became a gentleman-farmer at Geelong and served as a member of the Victoria Legislative Council. Turning his attention north in 1860, Wills purchased the lease of Cullin-La-Ringo Station on the Nogoa River in central Queensland and the following year his party of 25 men, women and children set out from Brisbane with a nucleus of stock to take formal possession of the property.

In Victoria Wills had established cordial relations with the Aboriginal people and despite warnings from neighbouring pastoralists he took few precautions on the Queensland frontier. It proved to be a fatal mistake, though what prompted local Aboriginal people to attack Wills' party remains unclear. What is known with certainty is that in the early afternoon of 17 October 1861 a large group of Aboriginal warriors descended on the camp and killed 16 European men, women and children. Wills was among the victims. In response, units of the Native Mounted Police and vigilante groups organised by pastoralists conducted a series of savage reprisals throughout a wide are of central Queensland.

Can you help us transcribe this document? Send your transcription to info@discoveringqueensland.com.au. 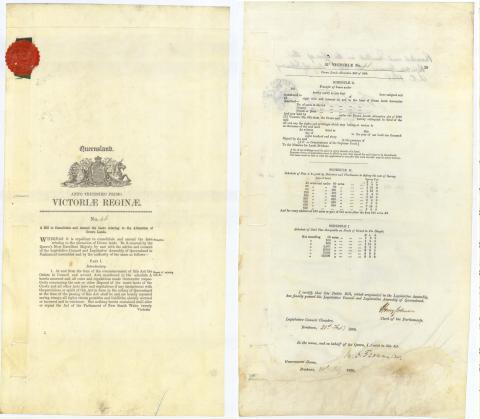 The Election Acts Amendments Act of 1905