Sir,—Many thanks for your paragraph anent the necessity for play sheds in connection with our State schools, particularly the Leichhardt-street schools.

By the kind patronage of the public the necessary amount has been raised by the committee, chiefly from the entertainments so well arranged by Mr. Morris and his assistants, and has been placed to the credit of the Secretary for Public Instruction, who, we trust, will be able to procure their erection at once, as, apart altogether from their legitimate use and purpose as play sheds, it is absolutely necessary to relieve the overcrowded state of the school during the hours devoted to teaching.

It is not too much to say that, during such weather as we have had, and such as we may have after the holidays are over, the Leichhardt-street schools are already totally inadequate to accommodate 600 children, which is about the number now attending them

It is not yet two years since they were opened, and the board were considered to deserve great credit for making such apparently ample provision for the wants of the neighbourhood in that respect, but we already find that the attendance far exceeds the estimated number, and whether this arises from the increasing importance and population of the neighbourhood, or from the success and popularity of the teachers, it demonstrates the necessity for the immediate erection of the sheds, so that they may be available on the resumption of school duties after the holidays. --Yours, &c., A RESIDENT

TO THE EDITOR OF THE TELEGRAPH.

Sir — In the Courier of to-day I notice a letter signed “Resident,” stating that the committee of the entertainments given for the purpose of raising money to provide play sheds for the children had succeeded in obtaining the necessary funds for the purpose.

It has taken many months to do it; now, Mr. Editor, ought it to have done so? The parents of the said children pay nothing for their education, and I think it is very mean of them to allow anyone to assist in the matter, as they ought to have put their hands in their pockets for the amount required, long ago, and saved themselves a much larger sum for doctors and medicine, rendered necessary by the exposure of the children to the sun this very hot weather. — Yours, &c., MINDI.

Agitation for a primary school in the Spring Hill area commenced in 1873, culminating in the establishment of three separate schools - Leichhardt Street Boys' School, Leichhardt Street Girls' School, and Leichhardt Street Infants' School (later renamed Brisbane Central State School). Opening 25 January 1875 on a large site, the schools were initially accommodated in one building built in 1874. As attendance grew, other buildings were constructed, including; a playshed (1887); a high-set, timber classroom building for the boys' school (1909); a timber classroom building for the practising school (c1929); a brick building for the infants' school (c1952); as well as playgrounds, extensive cuttings, retaining walls, landscaping and plantings.

The initial school building for the Leichhardt Street schools was a low-set, one-storey, brick structure designed by established Brisbane architect Richard George Suter. Suter was a private architect commissioned from 1865 by the Board of General Education to design school buildings. After 1868, Suter was responsible for most of the Board's buildings until 1875. As an architect in the early years of the colony, Suter was prolific despite only practicing for approximately 10 years in Queensland and had a strong influence on the establishment of Queensland architecture, being credited with introducing 'outside studding' construction technique to the state.

Suter's Brisbane school buildings were of brick construction. His initial designs were simple, low-set, structures with gable roofs, and rectangular in plan. In 1873 he introduced an ‘improved plan' adding front and rear verandahs to provide hat rooms and additional play and classroom space beginning a distinctive design solution of 'classroom and verandah' that continued through evolution until at least the 1960s.

The contract to construct the Suter building for the Leichhardt Street schools was let on 5 February 1874 to builders Dennis & Sons, with a price of £1970. The T-shaped building had three large classrooms - the long front wing held two 80 by 25 feet (24.9 by 7.6 metres) classrooms, one each for the boys' and girls' schools, and projecting to the rear was one 25 by 24 feet (7.6 by 7.3 metres) classroom for the infants' school. The building had a symmetrical front elevation with a projecting central room 20 by 25 feet (6.1 by 7.6 metres) flanked by a small teachers' room either side and a verandah along the front and rear.

From the school's opening, the Suter building was overcrowded and had other problems, including poor lighting and ventilation. From 1893 the Department of Public Works became responsible for school design and worked to greatly improve its standard designs to address the natural ventilation and lighting of classroom interiors. The department's architects experimented with different combinations of roof ventilators, ceiling and wall vents, larger windows, dormer windows and ducting. Roof ventilators became fleches which grew larger as the experimentation continued. Prior to the widespread adoption of electricity and artificial lighting, achieving an ideal or even adequate level of natural light in classrooms, without glare, was of critical importance to educators and consequently it became a primary determinant of the design concept and layout of all school buildings. From around 1909 windows were rearranged and enlarged to provide a greater amount of gentle, southern light into the room and desks were rearranged to have the light falling onto the students' left hand side. This reduced glare, and, since students were forcibly right-handed, did not throw a shadow onto the page. This often meant a complete transformation of the fenestration of existing buildings. Windows were larger and sills were lowered to let in more light generally. Smaller classrooms were preferred as they were easier to light correctly. Interiors became lighter and airier and met with immediate approval from educationalists.

Over time, the Leichhardt Street schools' Suter building was altered to improve lighting and ventilation of the interior to standard designs by the department. In c1897 skylights were added to the roof either side of the spire to aid internal lighting of the classrooms. In c1911 these were replaced with dormer windows, and a large arched window was added to the end (south-eastern) wall. To further improve the internal light conditions the rear verandah was removed between 1918 and 1933. The projecting infants' wing was demolished in 1933, replaced by an asphalted assembly area. Banks of casement windows were added to the rear wall to greatly increase the natural lighting and ventilation of the classrooms. This work is typical of the standard 'improvements' designed by the Department of Public Works that were made to older education buildings to meet evolving education philosophies espoused by the Department of Education of over time. 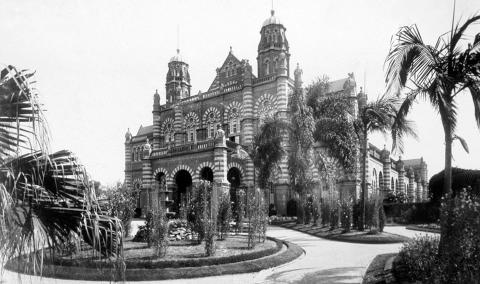