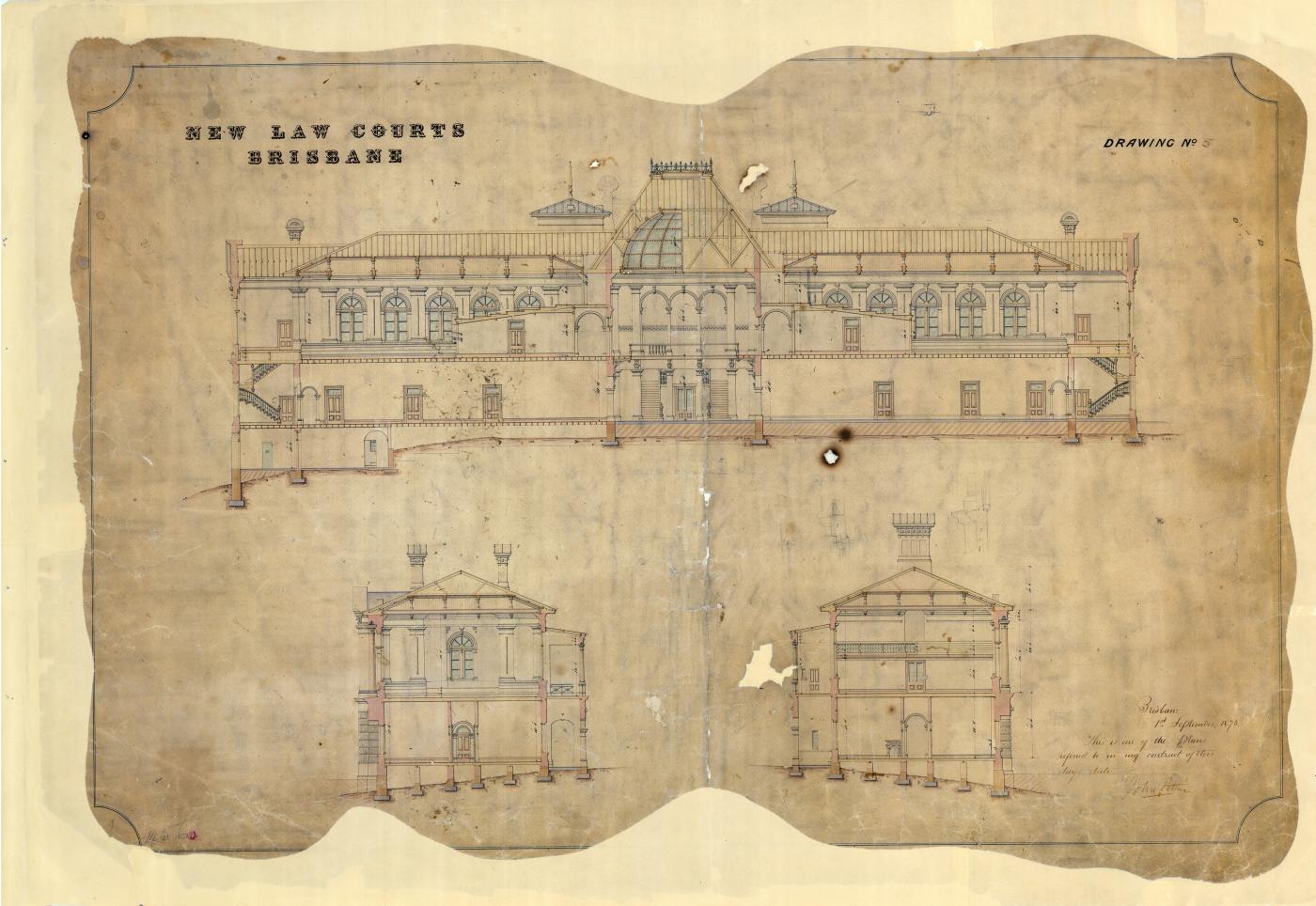 Our new Law Courts, though judging from appearances in George-street not within some months of completion, are to be opened for business on Monday next, when his Honor Mr. Justice Lilley presides in the criminal sittings of the Supreme Court. The building when finished will be a tolerably imposing pile, and the internal arrangements are excellently adapted to the convenience of all attending the courts, while the absence of noise and the admirable ventilation will appear a heavenly change to Judges, juries, reporters, and all who have served their painful apprenticeship in the old building.

The building is in the shape of a T, the cross head facing North Quay, and presenting a front to the river of 228ft., whilst the shank of the T abuts upon George-street. Of the three arms thus springing from one common centre the right and left of the head of the T form the Criminal and Supreme Courts respectively, whilst the shank holds the District Court. The two former are now completed.

To give some idea of the building we must state that the style is simple Doric. The front entrance from the North Quay is not a little marred by the meanness of the dimensions of the entrance passage, which is not more than 7ft. or 8ft wide, leading to the entrance court, a fine square of 36ft. with a height of 65ft., covered by a mansard roof, a gallery with open balustrade running round at the first story. The court is partially paved with Minton tiles, the centre being cemented; and looking up to the ceiling at the full height of the building the effect is decidedly fine. From this centre three corridors stretch away along the different arms of the building, on each side of which are the rooms for the Judges, their associates, and the different officers. The staircase fronts you on entering, and leads by two flights to the gallery, on the front of which, looking out on the river, is the library. A short corridor on each side leads either to the Supreme or Criminal Courts. These are fine halls 40ft. square, with a raised alcove or recess at the ends, which still further increase their size, and in which the Judges sit. The open Queen-post ceilings are of varnished wood, and haye a very light and graceful appearance. In the Criminal Court a winding stone stair leads from the cells below to the dock, so that prisoners will be entirely isolated. The ornamental screen behind the Judges and all the fittings are of cedar and of excellent workmanship; and the public, whom curiosity or personal interest prompt to attend, are accommodated in a deep, raised gallery at the back. The entrance for the public is in one of the angles of the T by a spiral stair that leads up one of the square towers. These towers also serve to assist the ventilation of the whole building, being fitted at the top with glass louvres. The corresponding stair on the other side is for jurymen and witnesses only. The jury-room has access to a balcony in so breezy a situation that the rigors of confinement would be considerably mitigated in the case of their being locked up. There are two fireproof rooms for records on the ground floor, with massive iron doors. The George-street front will differ somewhat from that facing the river, as although the same general style of Doric architecture is followed, with double columns of stone, the gable of the latter is changed to a square parapet with open balustrade. At present, with one-third of the building in an unfinished state, it is difficult to judge of the effect when completed, but there can be no question but that the building will be a most handsome addition to our public edifices and worthy of the capital site it occupies. The land at present is cumbered up with all sorts of unsightly buildings on the George-street side, but when these are cleared away, and the enclosure surrounded with the ornamental brick parapet and iron railing, the pile will be shown off to advantage. On the river front there will be two terraces and three flights of steps, and we trust some ornamentation may be attempted either in the shape of flower beds or ornamental trees that may in some measure atone for the beautiful silky oaks that were sacrificed to official vandalism. We believe the cost of the building when completed will be about £36,000.

This drawing of the Supreme Court is signed and dated by John Petrie.

"It was not until the mid-1870s that the need for a new building for the Supreme and District Courts became acute. By this time, Parliament was told, ‘it had become almost impossible to conduct the ordinary business of the Court in the present building. The traffic on the street created such a great noise that it was impossible sometimes to hear either the witnesses giving their evidence or the counsel or Judge addressing the jury.'

With the population and economy of Queensland steadily growing, the need for new accommodation for the courts could no longer be ignored. At the time of separation, the site currently occupied by the City Hall had been reserved for the new courthouse. The first Colonial Architect, Charles Tiffin, had prepared ‘dignified and imposing’ plans for this site. However, this expensive proposal was not pursued. By 1874, a more modest proposal was favoured. The site of the original convict hospital in George Street had become available for redevelopment, because of the relocation of the Brisbane Hospital to Herston (1867). The task of designing a courthouse for this site was entrusted to Tiffin’s successor, FDG Stanley, who designed a building with three arcaded wings in the shape of a T, which radiated from a central tower. This design would maximise the natural light and ventilation available to each of the courtrooms and offices, and would use arcades and balconies to moderate the temperature of the principal rooms. These were important considerations in Queensland, at a time before electricity was available for lighting or air-conditioning. The design was well received at the time, but could not proceed to be constructed in stone because of the cost. With some modification, John Petrie was awarded the contract to construct the building in rendered brick for about £33,000" 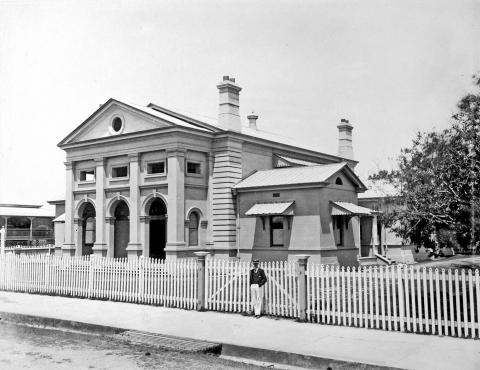 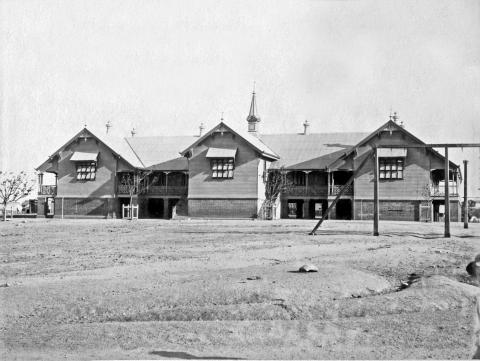