The old cemetery reserves at Paddington have been converted into Lang Park. The name is a compliment to the late Rev. Dr. John Dunmore Lang, who in the fifties of last century did so much for the advancement of Australia and especially Queensland. Many thousands of our people - the great mass of the historically uninformed - will have heard of the name of Lang Park being given to the reserves and wondered why. Perhaps some day when our sterling pioneers have been dead long enough to be canonised some memorials will be erected to their memory, and a statue of the late Dr. Lang in the park which now bears his name may inspire the younger generation to a keener desire to know more of the beginnings of history in the settlement of their country.

Some question has been raised as to the propriety of making a playground for children and grounds for the athletic games of the children of an older growth upon a spot which was once consecrated as the resting place of the dead; but the dead no longer are there, and there is no defilement of a mere place by making it the venue of childish happiness. Indeed some of the dead who loved children would be glad, if they were not in the voiceless land [...].

But all that remained of the poor morality of the old pioneers has been reverently removed and laid in the dreamless sleep elsewhere. And the City Council of Brisbane is to take over Lang Park and transform a public eyesore into a smiling pleasure place for young and old.

The site of Lang Park was originally the North Brisbane Cemetery, and until 1875 was Brisbane's primary cemetery. By 1911 the area was heavily populated, so the Paddington Cemeteries Act (1911) was introduced and the site was redeveloped as a recreational site. In 1914 it was fenced off and named Lang Park after John Dunmore Lang.

Lang Park is now the site of Suncorp Stadium, home of the Brisbane Broncos, the Queensland Reds and the Brisbane Roar. 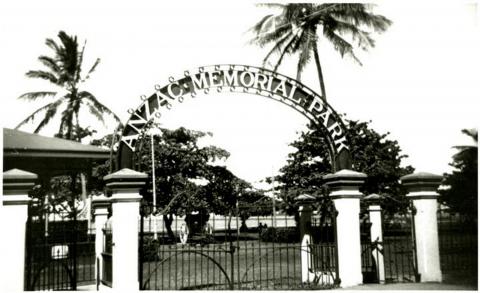