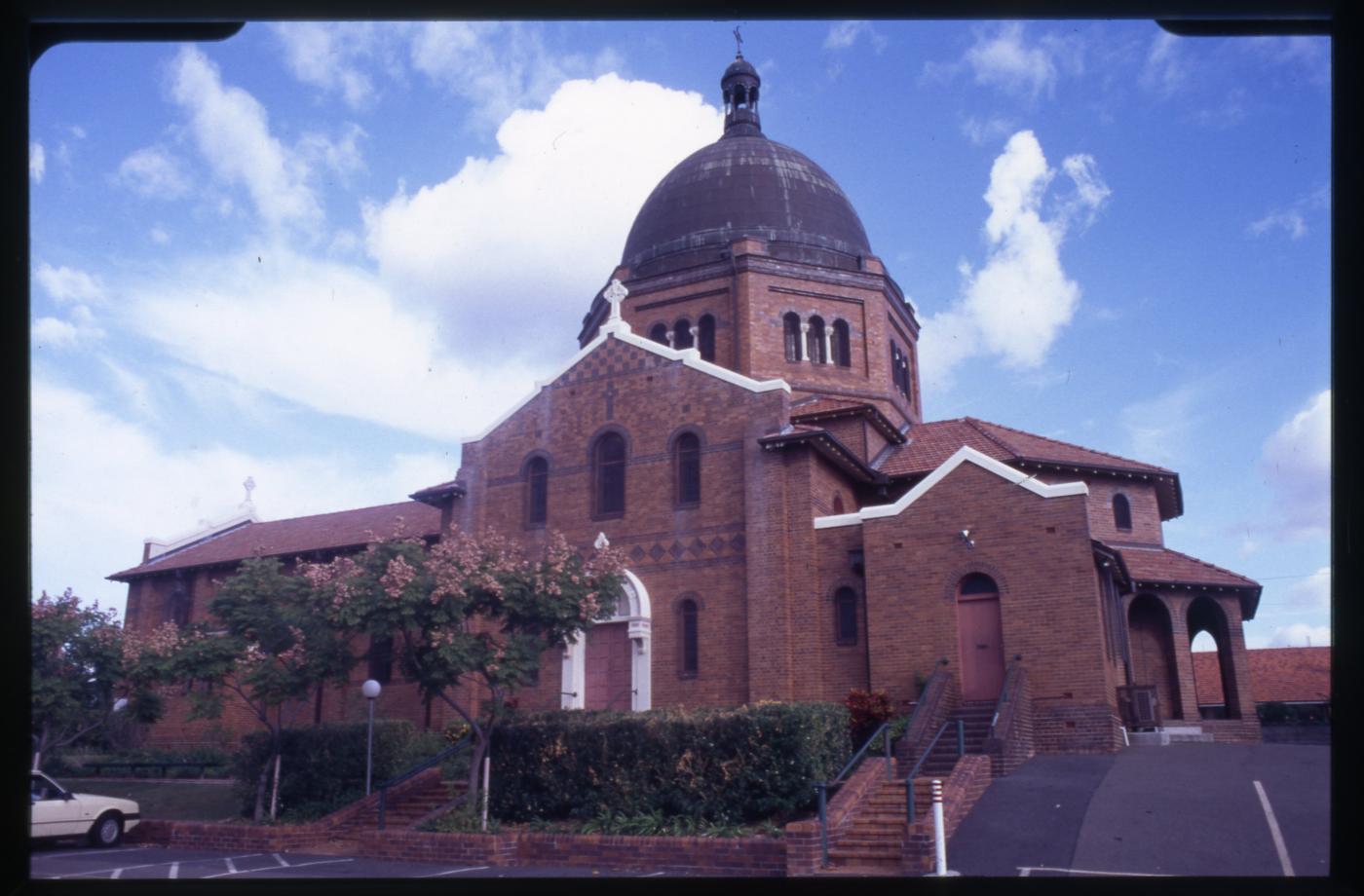 The Catholics' public profession of faith - the annual Corpus Christi procession – which, this year, was celebrated in the grounds of the Mt. St. Joseph Convent, Nundah, attracted a huge assemblage yesterday afternoon.

Fully 20,000 people were there--brought by special trains and trams, and by motor cars and buses, from all suburbs. During the early afternoon there was one long procession of vehicles, which was regulated by special traffic constables stationed along the route to Nundah, And at the convent grounds there was a special body of policemen, who had hard work to keep the crowd back from the space reserved for the processionists. Indeed, the convent grounds were too small to accommodate the much greater crowd than that which assembled last year in the Nudgee College grounds.

Opportunity was also taken yesterday by the Archbishop of Brisbane (Dr. Duhig) to perform the blessing ceremony and lay the foundation stone of the new Corpus Christi Church at Nundah. This he did immediately after the Benediction of the Blessed Sacrament, which followed the procession.

The procession was organised by the Rev. Father Jordan, the Nundah parish priest, and he was assisted in the carrying out of the arrangements yesterday by the Rev. Father T. Molony, Adm. About 2000 took part in the huge procession. It was headed by the cross-bearer and acolytes, who were followed by boys from the Christian Brothers' schools and girls from the convent schools. Next in order were the Women's and Men's Sacred Heart Sodalities, and members of the H.A.C.B. Society in regalia. The Children of Mary in their robes came next. Then followed in order the All Hallows', ' Lourdes Hill, and Nudgee Convents' girls, the choirs of South Brisbane Churches, Christian Brothers' Old Boys, St. Leo’s University College, the St. Vincent de Paul Society, the choirs of the North Brisbane Churches, Knights of the Blessed Sacrament, altar boys from city and suburban churches, and Christian Brothers. At the rear of the procession were a number of priests, wearing their Mass vestments, the Archbishop, carrying the Blessed Sacrament, and sacred Ministers. With the Archbishop were Bishop Coppo, of Kimberley, W.A., Monsignor Byrne, V.G. (Ipswich), and Monsignor Potter (Warwick). The procession marched through the grounds, under three decorated arches and halted in a space before the specially decorated altar at which the Benediction was celebrated by the Archbishop.

After the blessing of the foundation stone Father Jordan welcomed the Archbishop and the visiting prelates and priests and all the people.  Corpus Christi, he said, was a feast of faith and love and the day which especially showed the great Catholic spirit.  The memory of the day would live in the fine church which was to be erected on the ground hallowed by the procession.  He had already received nearly £900 towards the new church, and he appealed to all those present to contribute generously to the collection to be taken.

The Archbishop then delivered an address. It had given him great pleasure, he stated, to place in position the foundation stone over which would soon rise the walls of a beautiful temple to commemorate permanently the great mystery of the Blessed Sacrament which had been honoured that afternoon by a manifestation of Catholic faith unparalleled in the history of Queensland. “While the magnates of commerce in our city are continually adding to its business houses palatial buildings that mark the advance of our commercial prosperity, it is only fitting that we should raise monuments, such as the church to be built on this commanding site, to mark the growth of religion in our midst," he continued. “Some few weeks ago, when we were holding a procession in another place a passer-by remarked, ‘Religious fanatics.’  Had we been holding a demonstration of fidelity to the Sovereign to whom with our fellow citizens we pay sincere allegiance, or an agitation for better working conditions, we would have been called 'loyal citizens' or 'good unionists,' as the case might be; but because we were holding a demonstration of our Catholic faith we were 'religious fanatics.' But we do not mind so much what we are called if the cause of religion is served. No sensible man can ignore the significance of the mighty assemblage here this afternoon. It is composed of every class to be found in the Catholic Church, which, like a fond mother, takes all her children in one embrace. The first citizens of the land co-mingle here with the humblest of their brethren. Employer and employee, master and servant, learned and simple, old and young no matter to what nationality they belong, are joined here this afternoon in the profession of a faith that has stood the test of persecution and time, a faith that has flourished through every form of government known to civilisation, a faith indefectible and indestructible - a faith to the magnificent unity of which this gathering is so cogent a testimony

“This sacred edifice, so beautiful and chaste in design, to be built on this site, will be a golden link in the chain of church buildings around the city. The Church is spoken of in Holy Scripture, and very appropriately so, as a queen encircled with variety.  There is a wonderful variety in her life and in her liturgy.  As there is a variety in her saints, in her children, who are of all nations, tongues and colours, and in her great work of education and charity. So too, there is a great variety in the arts which she calls into her service - architecture, painting, sculpture, music, and eloquence. Nothing is too good for God's service, nothing is too precious to sacrifice as a testimony of our faith in Heaven, and so we love to make the material building as worthy of Him is our means will permit. The site here is a noble one. The old home - one of the oldest in Brisbane - that has stood on it for three or four generations, and that is now a convent, casquet of interesting memories. The late Sir Samuel Griffith told me that he made his first or second political speech in this very house. For many years it was the home of that worthy citizen, and his family, the late Mr Henry Donkin.  I purchased it from him in 1915. That the site is now to be crowned with a beautiful Romanesque church, which will be a great adornment to the locality, is a matter which gives us all the deepest satisfaction. Later the Sisters of St Joseph will replace the old house with a magnificent convent and boarding school.

“Nundah is growing rapidly in importance,” concluded the Archbishop, "and religious and educational facilities must expand with it. I hope Father Jordan will receive all the assistance he may require to carry out this great project, and that within 12 months we shall again be assembled to open the church so appropriately named Corpus Christi."

Bishop Coppo congratulated those present upon the great celebration, which, he said, was a real specimen of the faith of the Catholics.

A vote of thanks to Archbishop Duhig was proposed by Monsignor Byrne and by Monsignor Potter, and seconded by the Minister for Works (Mr M. J. Kirwan).

The Corpus Christi Church was constructed in 1925-6, for the catholic parish at Nundah, who formerly practiced in a small timber church on another site. The church was constructed under the guidance of the then Archbishop James Duhig, who promoted catholic presence in Brisbane by exploiting prominent sites, to produce landmarks. Corpus Christi may have been designed as a scale model for the Holy Name Cathedral which was in the planning stages at this time. The architects for the project were Hennessey, Hennessey, Keesing and Co.

Corpus Christi Church was planned to be a golden link in the chain of churches around Brisbane. Some sources state that it was a scale model for the Holy Name Cathedral, which was planned for a site in Ann Street, across the street from All Hallows' School. The design of both of these Hennessey and Hennessey buildings was thought to be reminiscent of St Peter's in Rome, which has the characteristic dome, surmounted by a lantern and cross.

The laying of the foundation stone of the Corpus Christi Church on June 14, 1925 attracted 20,000 people, who donated £2000 to the construction of the church, although the church was not fully paid off until the 1940s.

The church was designed by Hennessey, Hennessey, Keesing and Co, architects in Sydney, Brisbane and Melbourne. Jack Hennessey had recently completed the additions to St Mary's Cathedral in Sydney, and was a friend and colleague of the archbishop at the time. The work was completed by local contractor, SS Carrick, for a total cost of £16, 840. Corpus Christi Church was opened on November 21, 1926, in a ceremony which saw eight tiers of lights illuminating the dome. 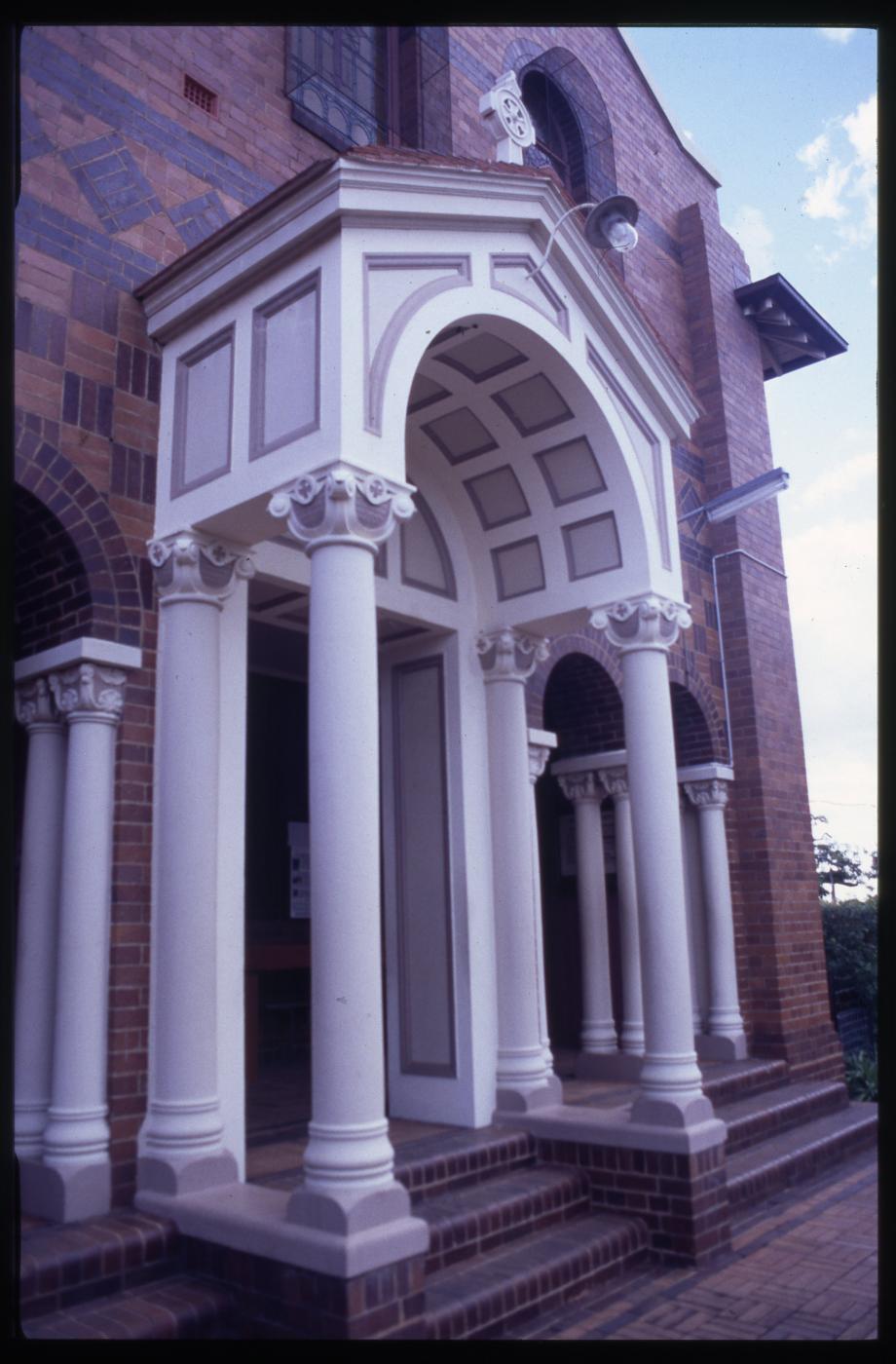 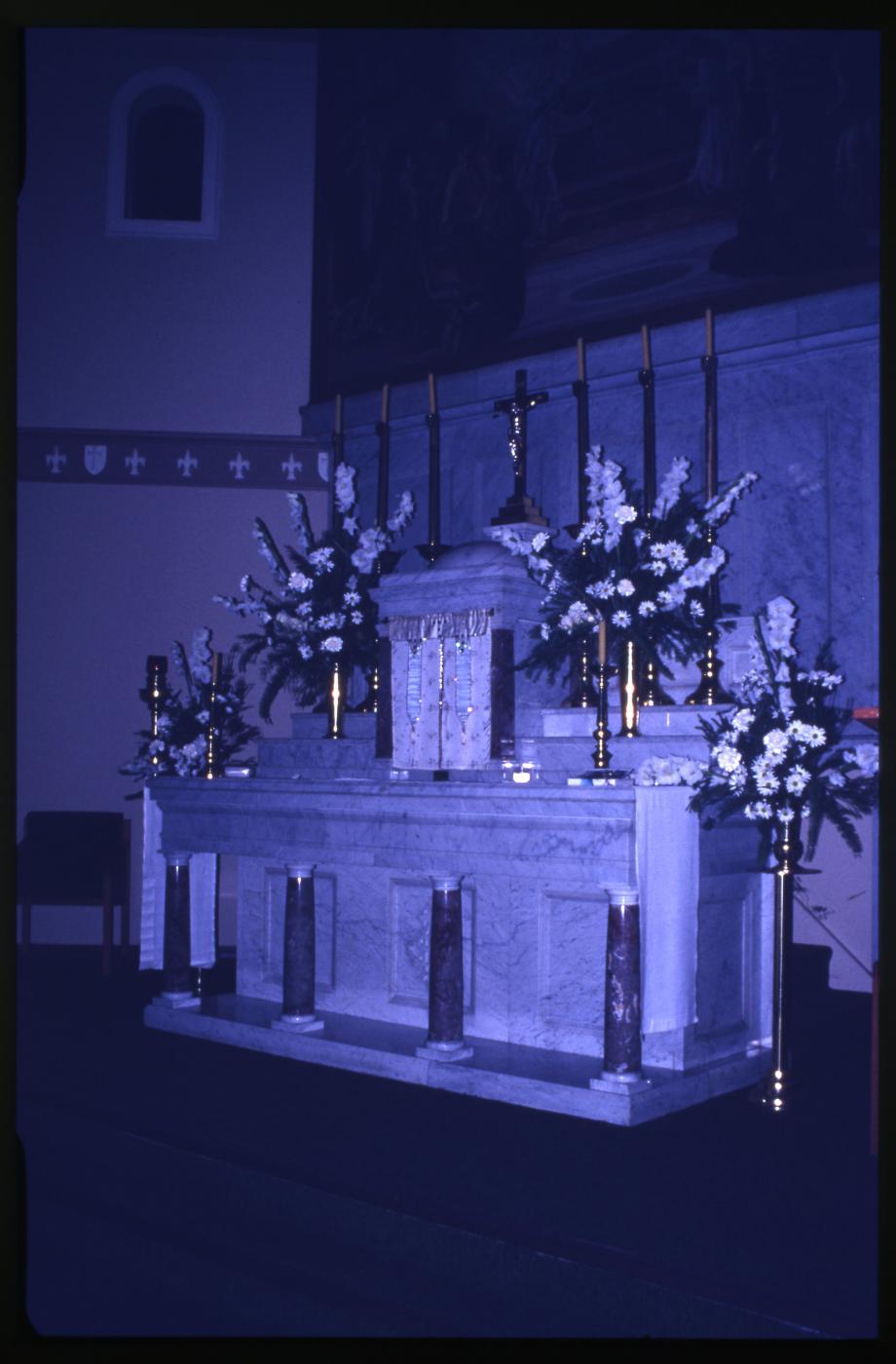 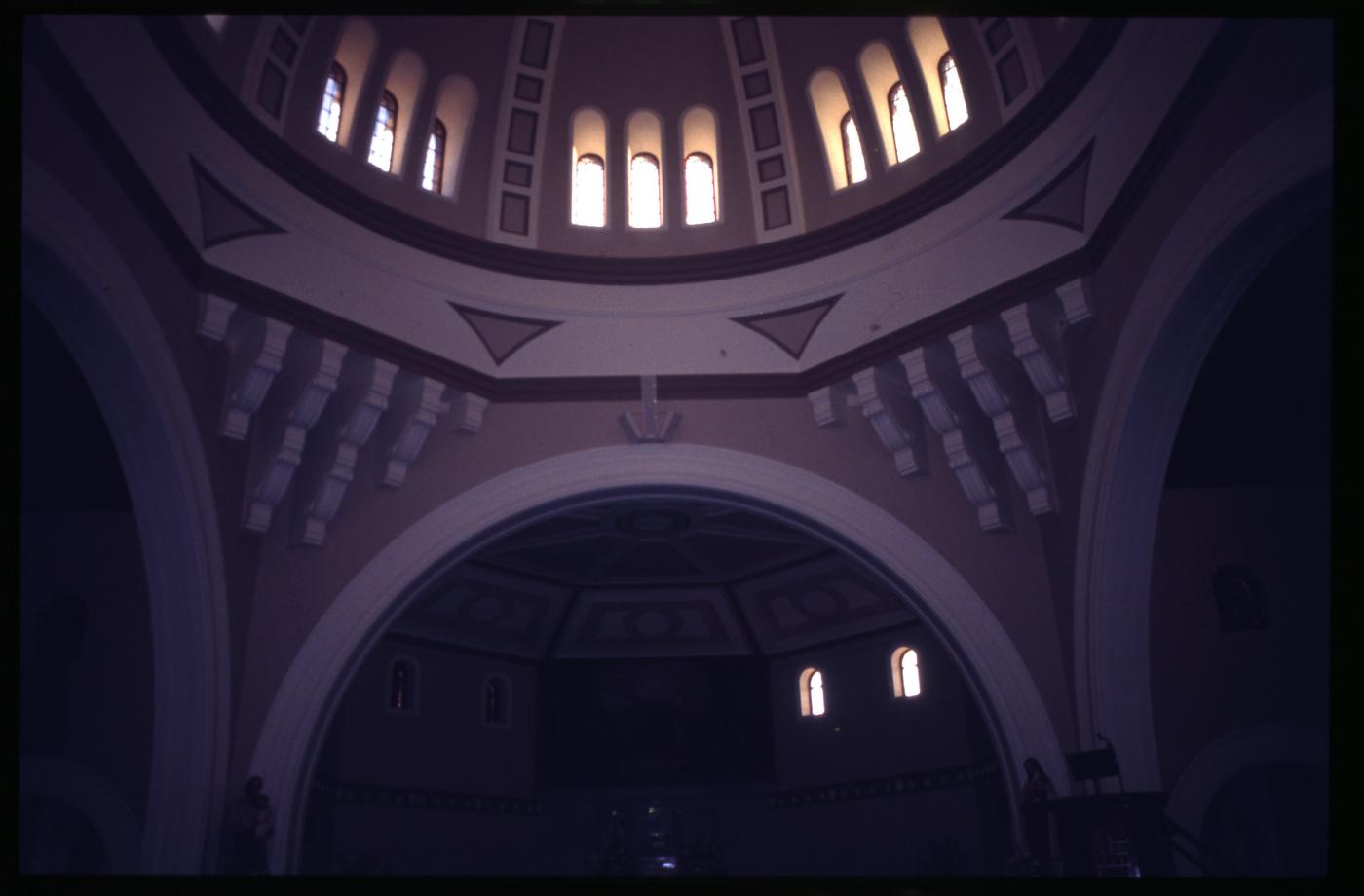 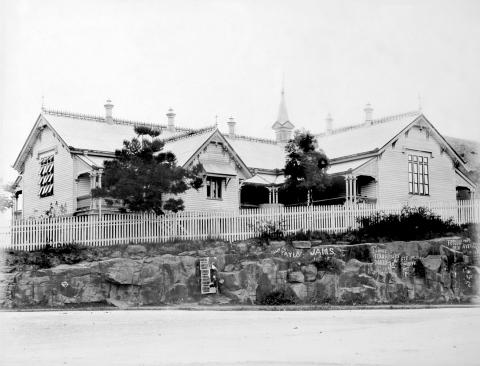 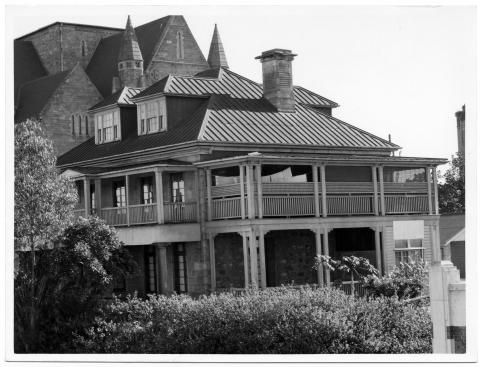