The death of the oldest free resident in our community and colony, is an event not to be allowed to happen without notice; and the aged, revered, and useful citizen who has just left our world for a better was no ordinary man. The name of Andrew Petrie is indissolubly connected not only with the early history of Brisbane, but of the colony. [...] For thirty-four years and more he had watched its growth and advancement from the ignoble position of a mere outlying penal settlement of New South Wales to the dignified and important status of an independent province. From 1837 to the time of his death, he watched its progress with a solicitude which never flagged - rejoicing in its prosperity, and sorrowing in its adversity.

[...] Mr Petrie was not a man to obtrude himself upon public notice, but, although he never actively interfered in political and other movements, he could express his views decidedly and vigorously in private. As a father he was kind and indulgent; as an employer he was respected, though strict and ever watchful; and as a friend and companion he was genial and hearty - nothing pleasing him  better than a "chat about the old times."

Andrew Petrie lived in a house provided for him at the corner of what is now Queen and Wharf Streets. At that time, 1895, Queen Street was occupied by Government and Military buildings on the western side from North Quay to the corner of Albert Street and then continued as a winding bush track from where Edward Street now stands, in a semicircular track to avoid the knoll there to where it crossed the creek at the present day intersection of Queen and Creek Streets. It continued towards the river and on to Petrie Bight and became the Eagle Farm Road (now termed Ann Street). There was no development past Albert Street.

Of three seated on the verandah, one is Miss Petrie with the Union Jack to be hoisted in welcome to the first Governor George Bowen. 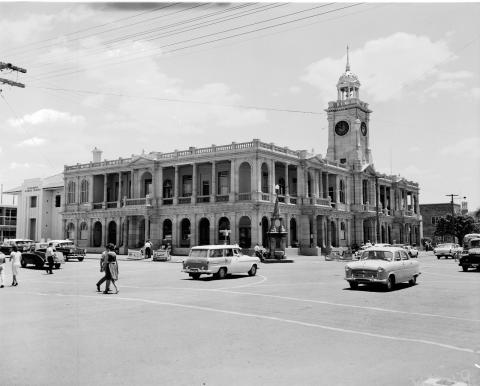