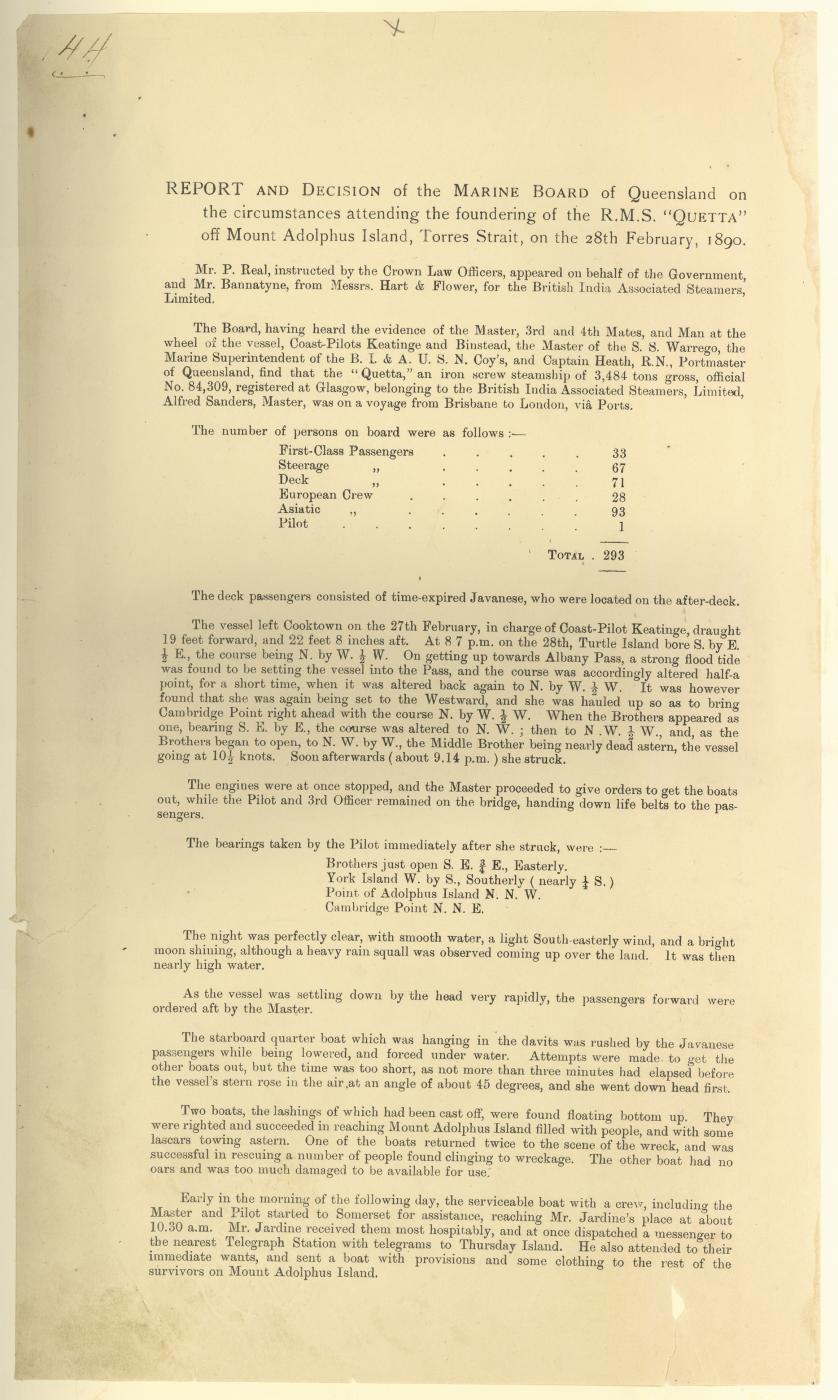 Wreck of the Quetta. Marine Board Report. All Exonerated from Blame.

The following is the full text of the report and decision of the Marine Board of Queensland on the circumstances attending the foundering of the R.M.S. Quetta, off Mount Adolphus Island, Torres Strait, on February 28, 1890 : —

The board, having heard the evidence of the master, third and fourth mates, and man at the wheel of the vessel, coast pilots Keatinge and Binstead, the master of the steamer Warrego, the marine superintendent of B.I. and A.U.S.N. Companies, and Captain Heath, R.N., port-master of Queensland, find that the Quetta. an iron screw steamship of 3,484 tons gross, official No. 84,309, registered at Glasgow, belonging to the British India Associated Steamers, Limited, Alfred Sanders, master, was on a voyage from Brisbane to London, via ports.

The number of persons on board was as follows: First-class passengers, 33 ; steerage, 67 ; deck, 72 ; European crew, 28 ; Asiatic, 92 ; pilot, 1 : total, 293. The deck passengers consisted of time-expired Javanese, who were located on the after dock. The vessel loft Cooktown on February 27, in charge of coast-pilot Keatinge, draught 19 feet forward, and 22 feet 8 inches aft. At 8.7 on the 28th, Turtle Island bore by S. by E. ½ E. the coarse being N. by W. ½ W. On getting up towards Albany Pass, a strong flood tide was found to be setting the vessel into the pass, and the course was accordingly altered half a point, for a short time, when it was altered back again to N. by W. ½ W. It was, however, found that she was again being set to the westward, and she was hauled up so as to bring Cambridge Point right ahead with the course N. by W. ½ W. When the Brothers appeared as one, bearing S.E. by E., the course was altered to N.W.; then to N.W. ½ W., and as the Brothers began to open, to N. W. by W., the Middle Brother being nearly dead astern, the vessel going at 10½ knots. Soon afterwards (about 9.14 p.m.) she struck.

The engines were at once stopped, and the master proceeded to give orders to get the boats out, while the pilot and third officer remained on the bridge, handing down lifebelts to the passengers.

The night was perfectly clear, with smooth water, a light south-easterly wind, and a bright moon shining, although a heavy rain squall was observed coming up over the laud. It was then nearly high water.

As the vessel was settling down by the head very rapidly, the passengers forward were ordered aft by the master.

The starboard quarter boat which was hanging in the davits was rushed by the Javanese passengers while being lowered, and forced under water. Attempts were made to get the other boats out, but the time was too short, as not more than three minutes had elapsed before the vessel's stern rose in the air at an angle of about 45 degrees, and she went down head first.

Two boats, the lashings of which had been cast off, were found floating bottom up. They were righted, and succeeded in reaching Mount Adolphus Island filled with people, and with some lascars towing astern. One of the boats returned twice to the scene of the wreck, and was successful in rescuing a number of people found clinging to wreckage. The other boat had no oars, and was too much damaged to be available for use.

Early in the morning of the following day, the serviceable boat with a crew, including the master and pilot, started to Somerset for assistance, reaching Mr. Jardine's place at about 10.30 a.m. Mr. Jardine received them most hospitably, and at once despatched a messenger to the nearest telegraph station with telegrams to Thursday Island. He also attended to their immediate wants, and sent a boat with provisions and some clothing to the rest of the survivors on Mount Adolphus Island.

The A.U.S.N. Company's steamer Victoria was intercepted in Albany Pass the same day, and proceeded at once towards Mount Adolphus Island, but meeting the Government steamer Albatross which had been sent out from Thursday Island, she transhipped those of the survivors who were on board, and proceeded on her voyage.

The Albatross remained at Mount Adolphus for the night, and the following morning searched the neighbouring islands, and succeeded in rescuing many people.

The New Guinea Government steamer Merrie England also assisted in the search, together with boats belonging to Messrs. Jardine and Summers.

The Quetta appears to have been well found in boats and all necessary equipment. She had eight lifebuoys, and over 600 lifebelts on board. The crew seemed well disciplined and promptly carried out the orders as well as the limited space of time would admit. The master exerted himself to the utmost after the vessel struck, whilst the pilot seems to have been very careful and attentive to the navigation of the vessel, and the course he steered was the one recommended on the Admiralty chart corrected to 1887. He appears to have been very cool and collected throughout.

From the evidence it appears that Captain Sanders's practice was to send an officer with a message to the chief engineer when he no longer required the use of the engines, and not to ring off by the telegraph as is the custom in some vessels. On this occasion, however, no had no time to send a messenger to him. The fourth engineer was on duty, and in all probability he and his assistants perished at their posts. The chief, second, and third engineers were not below at the time. The board consider it desirable that in all steamers there should be means of communication by speaking tubes, or otherwise, from the bridge to the engine room, although in this instance it is doubtful, even  if they had have warned, that there would have been time for those below to have got on deck before the vessel sank.

Reference has been made to the possibilities of the Quetta rook being identical with that upon which the Thales was supposed to have struck in 1877, but this is evidently an error, as the bearing given by the master of the Thales places it 1¼ mile south-east by south-half-south from the Quetta rock; and, from the evidence elicited in the course of this inquiry it appears more than probable that the Thales struck no unknown rock, but grounded on the outer fringe of the reef off the Brothers.

The position of the wreck has since been ascertained by divers, and from their report it is evident that she struck so heavily as to tear open her starboard side from right forward as far aft as the engine room, which accounts for the alarming rapidity with which she foundered.

Captain Sanders and Pilot Keating desire to place on record the great kindness and assistance received from Mr. Jardine and Mr. Summers and the masters of the Albatross and Merrie England.

The board are of opinion that the loss of the Quetta was occasioned by striking an unknown rock, about a mile south by west-half-west southerly from Cambridge Point, Mount Adolphus Island. They are further of opinion that there is nothing in the evidence adduced on which to found a charge, of default against Captain Sanders, his officers, or Pilot Keatinge, who are therefore exonerated from all blame.

A portion of the above appeared in our Second Edition on Saturday.

S.S. Quetta in the Brisbane River 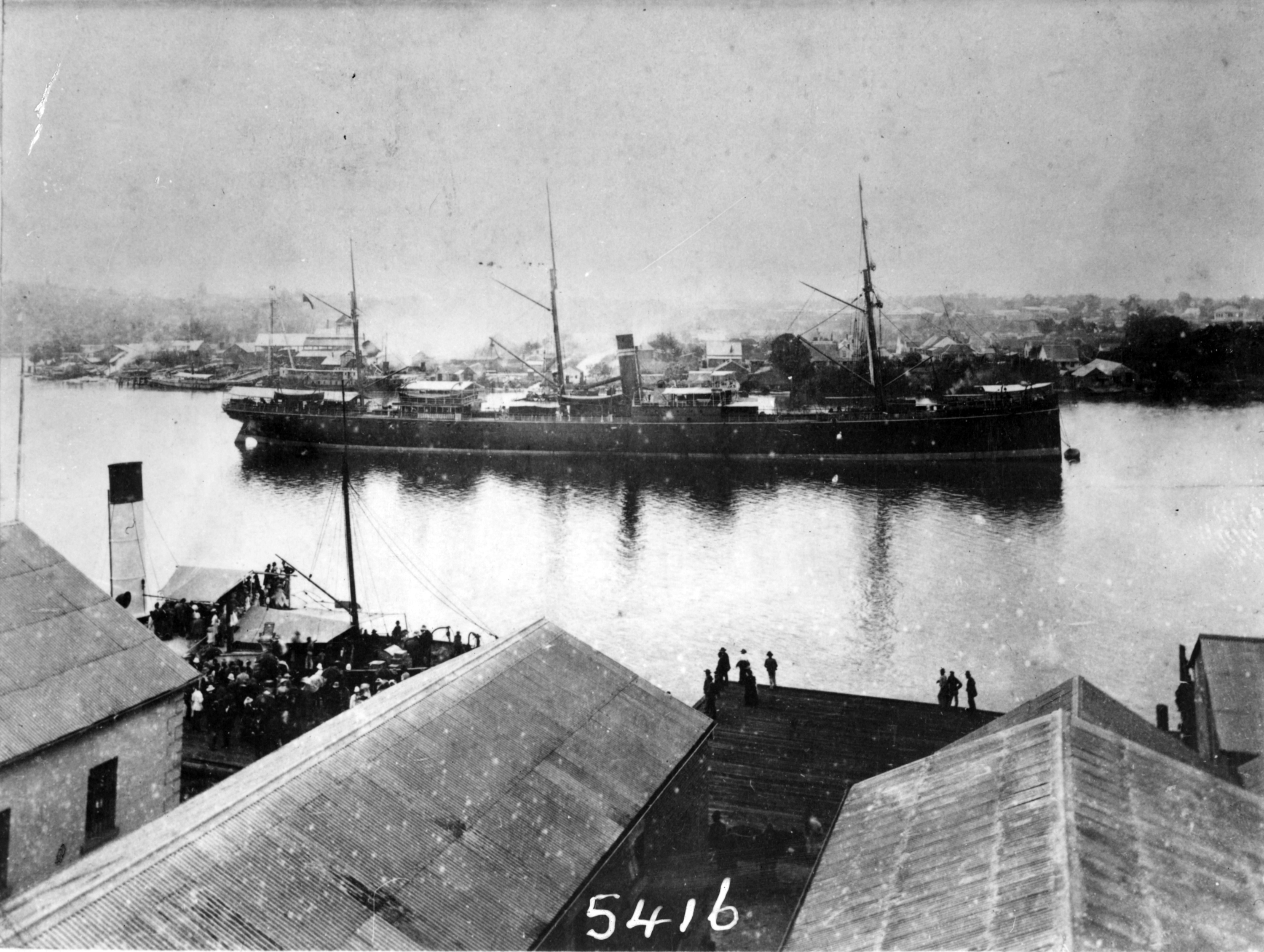 While en route from to , the British India Steamship Company’s iron-screw streamer struck an uncharted rock in on the night of 28 February 1890. The vessel sank within three minutes and of the 291 passengers and crew, 133 were lost. Among the victims of this maritime tragedy were a number of pioneer Queenslanders, including Claudius Buchanan Whish who had produced the colony’s first commercial crop of sugar-cane. Many of the dead were Javanese indentured labourers who were returning home after having completed their three-year contracts on sugar plantations. A subsequent Marine Board of Inquiry found that neither the captain nor the pilot of the - both of whom survived - had been at fault. Blame for the disaster was found to lie with inaccurate navigational charts, and such was the public outcry that the Queensland Government rushed the gunboat Paluma north to complete the survey of . New charts published by the end of the 1890 resulted in a safer shipping route between , and . 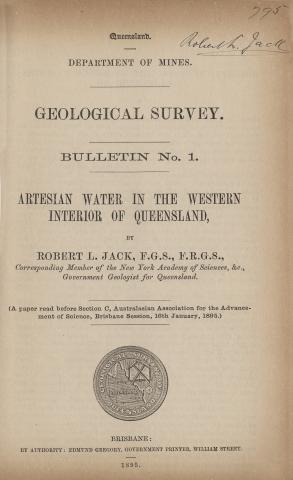 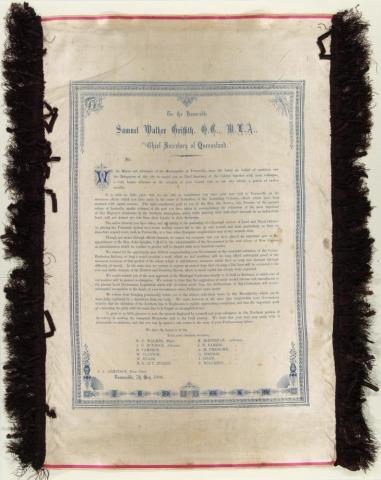